The Upcoming Elections in DRC, not looking good

On November 28th 2011 the Democratic Republic of Congo (DRC) is set to hold their next Presidential elections, and despite having ten candidates vying for the position, current President Joseph Kabila is set firmly as the front-runner. Kabila has been in office since 2001 after his father Laurent-Désiré Kabila was assassinated. The platform that Kabila is running on is focused on returning the DRC to the industrial mining hub of Africa. By capitalizing on the immense wealth buried in the ground, Kabila believes that by attracting foreign businesses back towards the nation’s natural resources, he can help the country pull itself out of poverty.

Kabila is smart in appealing to those issues that are the easiest for the voters to understand. However, when a leader is not elected in a democratic way, history shows that coupled with the determination to extract natural resource wealth, the combination is not necessarily good for the state. I believe that the next President should be fundamentally focused on fiscal improvement and reform, but I do not see great progress for the lives of the Congolese citizens in the foreseeable future.

While this looks depressing and much of the history of the DRC seems to be so, I remain hopeful that some positive practices will develop from these elections. First, by keeping Kabila in power, the DRC will continue in a state of normalcy rather than what could potentially be a violent regime change (however this is not addressing the potential for a violent election). Although much of the DRC is continually enmeshed with sectarian guerrilla warfare and the national army has little power, maintaining the status quo may provide a continual trajectory on which to develop bureaucratic improvements; and at the very least foster more faith among citizenry in maintaining regular election cycles.  Ideally, I would like to see Kabila put forth a platform with more emphasis on domestic projects such as fostering infrastructure and agriculture, offering assistance to a greater number of impoverished people. Or, he could propose to be more productive in eradicating and controlling the prevalent guerrilla armies.

In fact, in pinning the nations development goals on natural resources, the world will potentially watch the DRC fall further into disharmony. In continuing the theme from my last post, the natural resource trap as discusses by Paul Collier plays a huge part in why some nations have not reached developmental potential. Studies have found that 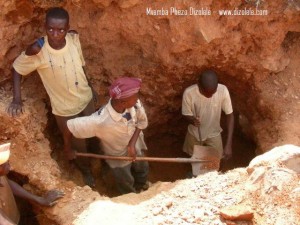 relying upon resource wealth will inevitably hinder both the development of democratic institutions as well as domestic wealth. Noting that Transparency International has ranked the DRC 164 out of 178 countries on levels of corruption in 2010 only goes to show that a tradition of dishonesty is already in place. Similarly, I would argue that the citizens would stand to gain nothing by “voting” Kabila into power because if he is successful in expanding the revenues gained from natural resources, he maintains no incentives to reinvest the money back into public goods. Currently 40% of the national income comes from foreign donors, and these often bear concessions necessitating how funds are spent. However, in the face of expanded development Kabila can afford to loose some foreign aid donations leading to even more freedom to allocate (or misuse) funds as he sees fit.

It is safe to assume that most current research and literature cannot even begin to account for the mines and resources the independent gorilla militias are controlling and exploiting as well.  These groups are rampant throughout the country and funding themselves by continually excavating and selling minerals on the black market to neighboring nations.  Through this access to natural resources, these militias will stay in power and the violence will continue as they work to take over what could develop into an ever-expanding mining industry.

In addition to the political setbacks that the platform will entail, a focus on only expanding the export sector will lead to neglect in developing other important economies such as agriculture and technological development. When a country relies upon a sole input for capital, market shocks will be devastating. One example of this was when the US implemented the 2010 Dodd-Frank Banking Act , and the DRI has saw international the demand for metals plummet.

While not intending to focus on institutional reform in this article, it can be assumed that expanding the mining sector is going to do little good for helping to alleviate poverty for a substantial number of DRC citizens. Although the country has had a turbulent history, I believe that they have the power under the right leaders and institutions to maximize their resources and reach towards their neighbors in becoming the economic powerhouse that Kabila is petitioning for.