Think about your daily routine. How many people do you think you interact with? 10, 20, 30 people? More? It’s probably not something you’ve ever considered. And why would you? Of course you’ll be surrounded by people throughout your day. But what if you weren’t? What if in fact you couldn’t interact with a single person? Couldn’t see them, touch them, hear them? It’s hard to even wrap your brain around I know. But that’s the reality people in 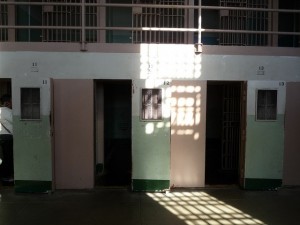 solitary confinementface for days, months, even years at a time.They spend 23 hours a day in small prison cell. Large enough for a bed, a sink, a toilet. Maybe a desk or a small window if they’re lucky. But that’s it. They can leave their cell for 1 hour a day to either sit in a separate, larger, and more open cell. Or they can spend that hour in the recreation room. Regardless of the choice, they still can’t interact with or speak to other prisoners. And they can only briefly interact with the prison guards as they change locations. It’s a pretty grim and incredibly difficult existence.

Obviously, not all prisoners are kept in solitary confinement. In theory, it’s only really meant to be used as a punishment or as a means to protect other prisoners. However, use of the practice is arbitrary and corruption runs rampant in the prison system. Guards have the power to throw anyone into solitary if they choose. And they can leave them there for as long as they wish. Yes, there are guidelines surrounding the use of punishment. But at the end of the day guards have an exceptional and almost frightening level of control over prisoners. But beyond implementation issues, the legality of the practice of solitary confinement has recently come under question. Studies have shown that solitary confinement can have lasting psychological damage on prisoners. So much so, 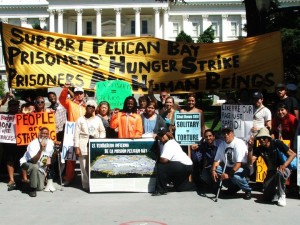 that people have begun arguing that the practice possibly constitutes torture or cruel and unusual punishment.

These issues have led to LOTS of protests. Prisoners regularly take part in hunger strikes to protest their treatment. Family members organize in front of prisons and write letters. The ACLU and other human rights groups publish literature surrounding the issues with solitary confinement. They’re all doing their best to spread the word and raise awareness around such an important issue. And needless to say, this amounts to a lot of people pushing for change.

And they really are doing a lot of good work. In fact, just this summer a Senate Judiciary Committee sat down to discuss the issue of solitary confinement. Many of the issues were discussed, people presented alternatives to solitary confinement, and made suggestions for necessary prison reform. The movement to end solitary confinement really seemed like it was finally gaining the necessary political momentum to make a change. However, this hearing happened in June. And here we are in October with no apparent changes. We’ve had lots of talk from the officials capable of implementing alternatives. But we still haven’t seen any sustainable impact on the prison culture. And quite frankly I don’t understand why.

How can officials allow solitary confinement to still be used so pervasively? How can they continuously ignore so many voices? Is it because people don’t think prisoners should have certain rights? Because people don’t care about their well-being? Does the need for a method of punishment in prison really outweigh the documented psychological damage it causes? I don’t think any of these things are true and I doubt you do either. But I haven’t been able to come up with a reasonable explanation for why we haven’t seen any change. But I think it’s something we need to think about. And it’s something we need to fix.

We’re definitely moving in the right direction. People have finally begun to listen when prisoners’ rights come up. But clearly we’re still missing the final step necessary to end solitary confinement. I don’t know honestly know what that step should be though. Maybe is starts with continuing to raise overall awareness of the issue. Maybe we should be putting more pressure on officials. But at the end of the day we need to continue fighting anyway we can. Because shouldn’t everyone in society be heard? And shouldn’t everyone be protected? EVEN when they’re in prison. Prisoners need other people to be their voice. And that starts with you and me.