You might have heard about the Ebola outbreak in Uganda, Africa, which started to receive media coverage towards the end of the summer. In one of my previous blog posts, I had written about the about the outbreak itself and its effects. Currently, there is more focus on another Ebola outbreak in Democratic Republic of Congo in Africa. Out of the seventy-two cases reported, there has been a total of thirty-two deaths which includes five health care workers. If this virus spreads, more health care workers will be needed to help control the spread of the virus and to take care of the patients. Patients are not the only victims of a virus. Health care workers have a high risk of getting infected with the Ebola virus while handling patients. Ninety percent of Ebola victims die and there is no treatment or vaccine. According to the officials from the World Health Organization, there is a risk of this outbreak spreading to larger cities in Congo. Almost nine million people live in Congo’s capital city, Kinshasa, because of the urban environment and lack of stable healthcare, the virus can easily spread among the population. If the Ebola virus spreads, more healthcare workers will be the unfortunate victims. 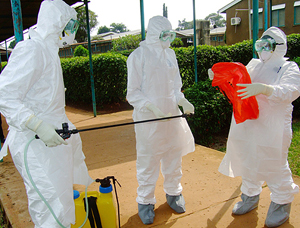 Unfortunately, there is a high incidence of health care workers getting infected during any communicable disease outbreak. For example, out of the seventy-two cases in this current outbreak of Ebola, twenty-three cases were of health care workers. These numbers may not seem very large, however these numbers can change if the virus spreads to other cities. The Ebola virus can spread through blood, bodily fluids or from unprotected handling of an infected corpse. Doctors, nurses, community health workers, and other health aides must follow a cautious protocol while taking care of patients by wearing protective gear such as specialized moon suits, and gloves. Unfortunately, mistakes can always happen. Despite wearing protective gear, health care workers may unintentionally come into contact with bodily fluids from the patient. While handling needles, workers can potentially be exposed to the virus by accidentally poking a needle into their glove. The health care workers can potentially spread the virus to other people. Unfortunately, even with the protective gear, health care personnel are still at risk of endangering their own lives. 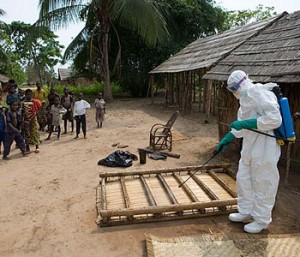