The biggest public health news currently is about the Ebola Outbreak that began in the Kibbale district in Uganda. You may have heard about it in the news or online. According to the World Health Organization, about 38 cases have been reported, and 14 people have already died from the virus. Currently, government and health officials are working to stop the spread of this infectious disease through various precautions. However, officials do believe that the number of people infected will increase in the coming days. 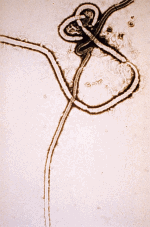 What is the Ebola Virus?

The Ebola Virus was first discovered in an African nation called Zaire (now known as the Democratic Republic of the Congo) in 1976. Individuals diagnosed with the Ebola often suffer from symptoms such as haemorrhagic fever, muscle weakness and pain, headaches, internal and external bleeding. The virus spreads from direct contact with blood or other bodily fluids of an infected person. It also can be contracted from handling or touching an infected primate. Currently, there is no treatment or any type of medicines that can cure this disease. In addition, there are no vaccinations available to even prevent it. The only way to stop the spread of the disease is by isolating individuals that already contracted the virus from people that have not. People who are infected with the disease are more likely going to die because there is no treatment. It is difficult to recognize the disease right away because the virus has the ability to mimic symptoms of other infectious diseases in the first few days of onset. As you can see, this virus is life-threatening and has the ability to kill thousands of people very quickly. 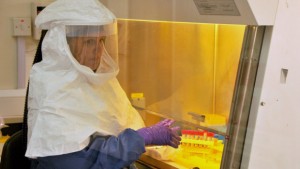 A medical worker from the U.S. Centers for Disease Control and Prevention, working on the Ebola outbreak in Uganda, is photographed August 2, 2012 at a laboratory in Entebbe 29 miles from the capital Kampala. (Credit: AP)

Why should we worry?

We need to take more precautions for the future because, it is possible that we may be victims of an outbreak or endanger others. Globalization can help spread these diseases quickly because more people are constantly traveling. For instance, the incubation period of an infectious disease such as Ebola is longer than a flight back from Congo to the United States. Are travelers informed about ebola or about any special safety precautions they need to take? On the US Department of State’s website for travel, there is only a small mention of ebola. There is no in depth information about ebola available through the government’s travel website nor is there any other resource provided. Even though, ebola outbreaks may not occur every day, it is still a deadly virus with no cure. It still needs to be addressed because of its severity. Websites are useful, however many people may not actually research health risks when traveling to other nations. One way to address this problem is to encourage travel websites (e.g. orbitz.com) and airlines to frequently display messages about health information on their websites. 58% of people around the globe are more likely to buy airline tickets and book hotel reservations online. After finishing this transaction, consumers can be directed to health safety information. This will be convenient for the traveler, and the traveler will be more likely to view this information. In addition, this idea can help reduce the chances of diseases spreading to local communities at the destination and beyond. This is just one way we can prevent the chances of deadly viruses such as Ebola spreading to the other areas around the globe. We still need to come up with other effective ways to prevent future outbreaks of ebola because in the future, we may not have the chance when the deadliest outbreak is lurking right outside our homes or the homes of others.