It’s not just the girls. Boys also are influenced by the images they see in the media.

When you look at the numbers, it’s clear that girls’ body image in the United States is in grave danger. 42% of first, second, and third grade girls want to lose weight.  More than 50% of ten-year-old girls wish they were thinner. And more than 90% of girls want to change at least one aspect of their physical appearance. What about the other side of the story though? How are the boys holding up? What about the boys?

I first realized my lack of insight into the world of male body insecurities last week as I watched two boys race for a cheese ball container at a 4th of July barbeque. One boy reached the container first, however was quickly pushed aside by the other one who stated, “Let me have them. You’re the fatter one anyway”. I stood there in awe, processing what I just heard. “He’s the fatter one?” He’s was a perfectly normal ten-year-old boy. And on the skinny side, if that. Kidding or not, the comment caught me off guard.

To be honest with you, I never really considered that boys might have body image issues too. I’ve put so much focus on the girls, that I didn’t leave much room for the boys. However, in that moment, I realized my error in judgement. Maybe girls aren’t the only ones with body insecurities. 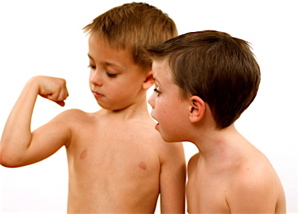 You already know about the statistics for girls, but how about for the boys? Research shows that by age seven, more than 50% of boys desire to have a more muscular body, a percentage which increases to around 90% through adolescence. In fact, a recent study found the demographic group who was most unhappy with their weight was not girls, like expected. It wasn’t even overweight boys. It was the underweight boys. And statistics show that the state of boys’ body image in the modern era is not getting better anytime soon. Around 45% of Western men are currently unhappy with some aspect of their body, a dramatic increase from only 15% twenty-five years ago.

The problem is that it’s not easy having the “ideal” male body. It’s not just about being muscular anymore. It’s about hitting the perfect balance- most boys want to be both muscular and lean at the same time. As a result, many males become overly preoccupied with exercise as a way to hide their insecurities. And while a little gym time is good for anyone, it becomes important to recognize that for some boys, it’s not just “a little gym time”. It becomes an unhealthy obsession. Unhealthy eating and exercise behaviors are more popular among teenage boys these days than you might think. And many boys go to other extremes- like purging, laxatives, skipping meals, and taking steroids- as a means to achieving the perfect body. 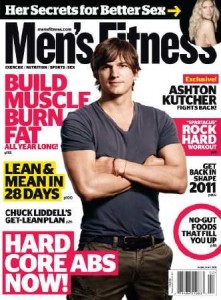 It’s interesting how it always seems to come back to the media and culture values, doesn’t it? A study done by the Harvard University Gazette compared the body image of men in the West versus those from Asian countries, specifically in Taiwan. They found that men in Taiwan were generally more satisfied with their bodies and had lower rates of steroid use than men in the West. The difference? There aren’t any fitness or bodybuilding magazines in Taiwan. The other difference? Intellectual and cultural achievements are more highly valued cultural values than an individual’s attractiveness in society. No wonder they have higher body satisfaction.

Men have their fair share of body insecurities, and it’s time that we acknowledged that.
Unhealthy eating and exercise behaviors are serious problems, which need to be addressed too. It’s important to note that body image problems aren’t isolated to just eating disorders. And they aren’t isolated to just females either. Male insecurities over body image have been swept under the rug for too long. It’s time that the battle for better body image is fought for both the girls and the boys. All people should have the right to live in a society that tells them that it’s alright to look the way they are. And while the media may not care, family and friends have the ability to say otherwise. The best way to win the fight is to admit that it exists. Make male body image a public issue. Shed its private facade. Only then can real changes take place.