I’m sure most of you reading this have experienced or have heard about how triple digit hot, and I mean hot, it has been from the Midwest to the East 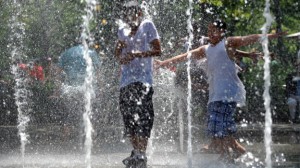 Coast the past week and a half. This summer is brutal and it’s only just started. Already dozens have died from these record high temperatures. Transportation has been disrupted. The heat has exacerbated Colorado wildfires and a drought in the nation’s Dust Bowl which threatens to disrupt the US food supply. Ironically major thunderstorms known as a ‘Derecho’ have left millions without power and have been the only source of cooler temperatures, cooler as in 90 degrees.

Remember how everyone kept talking about how mild this past winter was? It was always a topic of conversation at every get-together, party, etc. that I went to. It was unanimously awesome. Everyone was talking about how lucky we were, especially living in NYC where we experienced a few heavy snowstorms the year before. Even though I actually like cold weather, it was nice to not feel like I was freezing to death my second winter in the city. Well, we’re eating our words now aren’t we?

This is the kind of weather that climate scientists predicted would generally be caused by global warming. Yes, you could argue that this heat wave could just be one freak weather event, which does happen. Yes heat waves happen. But heat waves in conjunction with harsher than normal thunderstorms, drought, and wildfires? You can’t ignore that. It’s impossible to deny what’s happening with the weather in the US no matter where you live or what you believe about climate change. Changes are occurring on our planet and we cannot be so arrogant as to think that all the changes we’ve made to Earth haven’t adversely affected it to the point that it would begin to affect our lives. 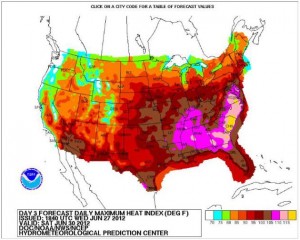 What makes this summer and this heat wave significant is that we’re finally starting to feel it. Climate change is no longer that theory you hear about happening sporadically in places around the world. It is finally affecting us and is creeping into our day-to-day lives. What worries me is what the long-term outcomes of these extreme weather events will be. The ongoing drought will not only affect agriculture, but dying and struggling crops could affect cattle supply if there is not enough food for feed. Millions of people’s lives have already been disrupted; affecting people’s health, their homes and their livelihoods.

Over the past few years, the increase in extreme weather-related events in the US have done much to convince Americans of climate change now that people are finally experiencing the impact of extreme weather. I don’t doubt that after this summer a lot more people will be convinced. Will you?