In the year 2000, the United Nations in association with other countries, created a global action plan to solve the world’s major problems by the year 2015. This global plan was divided into eight distinct goals: Eradicate extreme poverty and hunger, Achieve universal primary education, Promote gender equality and empower women, Reduce child mortality, Improve maternal health, Combat HIV/AIDS, Malaria and other diseases, Ensure environmental sustainability, and Global partnership for development. There are three years left till the tentative deadline to achieve all eight goals. Since it is 2012, it is kind of a halfway point till 2015. How effective has the UN and its partners have been so far? United Nations has provided the general public with informative reports regarding the status and progress of each Millennium Development Goal. I have decided to learn and research about the progress that is being made to achieve the goals by the planned deadline. The first goal that I want to dive into is eradicating extreme poverty and hunger. Eradication of extreme poverty and hunger is the first millennium development goal. It is the most obvious problem and the hardest to solve as well. More than a billion people live in extreme poverty around the world. In 2010, there were over 925 million hungry people living in the world.One of the major setbacks in the progress of this goal was the economic recession in 2007. Within this goal there are three distinct targets that must be fulfilled in order to achieve the overall goal. 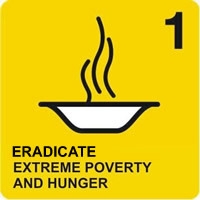 The first target is to halve the proportion of people whose income is less than $1 a day. According to the Millennium Development Goal report in 2012, despite the setback, this will target will be achieved. However, about 1 billion will still be living on less than $1.25 a day in 2015.

Also, major areas such as sub-Saharan Africa, and South Asia are still facing widespread poverty with no significant reduction. The major problem is that it is difficult to monitor and to analyze accurate data because it is difficult to get data from every single area in the world that is facing extreme poverty. In order to consistently see progress, it is necessary for countries and governments to invest in initiatives to increase economic growth.

The second target is to achieve full and productive employment and decent work for all, including women and young people. In 2000, there were about 689 million workers in the world that were living below $1.25 a day.

The third and final target is to halve the proportion of people who suffer from hunger. In years 2006-2008, the number of people that were undernourished in the world was 850 million people. The number of undernourished actually increased by 2 million people from 1990. Despite reductions in poverty, hunger was still a problem and there was no improvement. Poverty is a major key determinant in undernutrition in all regions especially for children. This is still a major problem in East Asia, sub-Saharan Africa, and areas of the South Asia excluding India. It is interesting to see that even though there has been significant reduction in poverty in East Asia, there is no reduction in hunger. 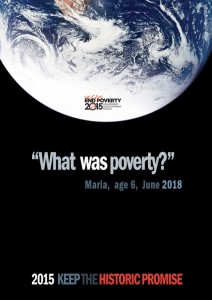 Overall, there is a lot of work left to do that must be done before the deadline. Poverty and hunger are such a widespread issues that is it difficult to see progress in actual real data. There needs to be a more accurate and reliable way to get actual data. When I was reading the reports, I noticed several times it was written that the data is not accurate or it difficult to get valid and reliable data. Since the world’s population is constantly growing, so are statistics. I think that it would be more easier to measure the impact and progress if they had taken on a more measurable goals. The best way to get accurate data is to measure the effect of different UN programs and initiatives that were created to help achieve this goal. It would be easier to measure to the impacts of program, and the trends and progress would be much clearer to analyze. I believe  this would be a much efficient way to see whether if progress actually occurring. The United Nations has done something more similar to this in September 2010, however it was not as detailed and it was not been updated since. The United Nation’s goal to tackle and eliminate poverty and hunger is good start to start resolving the overall problem. But, I do not think that poverty and hunger can be eliminated this easily even by a half. Reduction of the poverty and hunger is very slow process, and I doubt this problem will be this easily resolved.