I curled up in front of my television earlier this month, all set to watch the women’s gymnastic Olympic trials, when something caught my attention. At the start of the program, a promotional video began to run, flashing the names of the Olympic hopefuls. There was “Jordyn.. Gabby… McKayla… Alexandra… Kyla…” WAIT. Since when were we on a first name basis? It’s not like these athletes had the same notoriety as LeBron or Tiger. Even Michael Jordan, one of the greatest athletes in the world, is still referred to by both his first and last names. So why was it okay to refer to female gymnasts by only their first name? 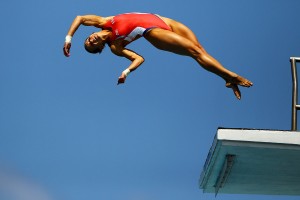 Gender bias in sports in nothing new. The hypersexualization and objectification of female athletes, both on the television and in popular sports magazines, has been around for years. News outlets have often been guilty of turning female athletes into pin-up girls in photo shoots, focusing on their beauty and femininity rather than their raw athleticism. It’s hard to ignore the visual stereotyping that takes place daily in newspapers and magazine. However, what’s less obvious is another type of gender bias – a verbal (or written) gender bias. What are the commentators really saying? What is the dialogue surrounding women’s sports, both during the Olympics, and the rest of the year? What most people don’t know is that verbal gender bias takes place every single day.

A common example of verbal gender bias in sports? Gender marking. Gender marking takes place when the gender of the athletes is told in reference to the sport or sporting event. Think of when a commentator comes on air, and says, “Welcome to coverage of the United State’s women’s basketball team”. That, in a nutshell, is gender marking. Instead of referring to it simply as the U.S. basketball team, emphasis is put on the women’s part. Gender marking also takes place often when referring to a school’s mascot. There are the Tennessee Volunteers, and then the Tennessee Lady Volunteers. The Arkansas Razorbacks, and then the Arkansas Lady Razorbacks. The LSU Tigers, and then the LSU Lady Tigers. “Lady” is put in place to differentiate women’s sports, from the so-called “real” sports. The result becomes that men’s sports are always set as the norm, while women’s remain the exception. As always in athletics, women become exceptions to the rule. 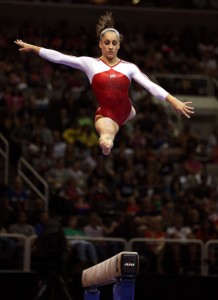 Which brings me back to my original point – “hierarchy of naming”. Hierarchy of naming is a linguistic process in which female athletes are commonly referred to by their first names, as shown by the Olympic promo video with the female gymnasts. Similar to using the word “girls”, hierarchy of naming is another means of infantilizing the average women athlete. It’s nothing new either. Researchers that have studied past Olympics, found that commentators refer to female athletes by their first names much more often than their male counterparts. A study found that commentators during the Olympics used a woman’s first name 32 times during a swimming and diving competition (compared with 8 times for the male competitors), 87 times for track and field (compared with 11), and 104 times in gymnastics (compared to 64). On average, female athletes were called by only their first name around 60% of the time. 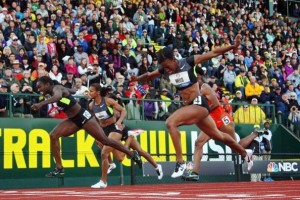 It’s important to realize that gender bias isn’t just limited to the visual. The way television stations and commentators frame sporting events linguistically also makes a difference, whether we realize it or not. By allowing commentators to continue to refer to many female athletes as “girls” is to say that they don’t deserve the same treatment as “men”, who are the “real athletes”. It perpetuates the stereotype that female athletes are at the end of the day, just “female athletes”. Inferiority is what is implied.

While watching the Olympics the next couple weeks, take note of such examples of gender bias. Add a comment at the end of this blog post for every time you see gender bias take place. Wouldn’t it be interesting to see if a pattern emerges over the course of the Olympics? If commentators refer to athletes more often as “girls” in certain sports, and not at all in others? If hierarchy of naming takes place across the board, or just for certain teams, or certain ages? Leave a comment or tweet at us @NotEnoughGood. The first step to social change always comes through awareness. Let’s get this started.