Did you know that June 5th is World Environment Day? Yeah, me either. That is until I noticed a tweet a few days ago that alerted me to this fact. If you’re into all things environmental you probably already know about this. If you’re not, you’re probably asking yourself “Wait, what is she talking about?” Rightfully so. I do not consider myself a seasoned environmental news junkie. This is something that I have only recently gotten into within the past six months thank to an environmental health course I took 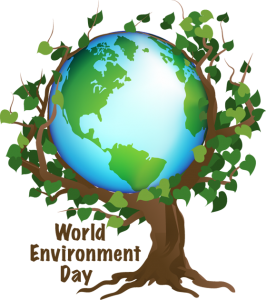 during school. Regardless I thought this was something worth checking out.

This year’s World Environment Day theme is ‘Green Economy: Does it include YOU?”  This theme, in my opinion, is particularly important and telling of the current state and future direction in which the conversation on environmental issues is heading. This theme is the first time that the individual has been addressed directly through a question. It begs each of us consider our role in our national and global green economy, and forces us to ask ourselves “Are we included?” The most important part of the question isn’t whether you are included or not, it’s whether you are excluded. It’s a call to action. The theme goes beyond the narrow view of just environmental problems. It broadens the idea of what is involved in environmental action to include social inclusion and equity.

So, what is a green economy and what does it mean to be included in it? The World Environment Day website breaks down a green economy into very simple terms: “low carbon, resource efficient and socially inclusive.” The first two terms make sense to me and if asked to define green economy, I probably would have pulled this out of the air. But the third term, “socially inclusive”, is where I got to thinking. The site goes on to explain that this economy is one where employment and income are spurred on by investments, both public and private, in sound green strategies, policies, and regulations. I’m starting to see where the individual, or the idea of social inclusion, fits in (or could fit in if they weren’t excluded).

What it seems to boil down to is: do you have opportunities within your own country to take part in

(through employment, thus generating an income) green ventures? If you have a green business or want to start one, is the governmental support there? Do you have a voice in politics where you could help pass policies, even at the local level, to help initiate a greener community? Do you have something as simple as the option to recycle?

This theme speaks to larger issues beyond just the environment and captures the idea that the solution is not just to an environmental problem. It’s to a multilayered problem and a multilayered solution that is political, economical, equitable and personal. It’s all of these and more. Take a few minutes just to go over in your head: does a green economy include you?

I considered this myself. I can recycle, I can vote on environmental issues, I have taken classes on environmental issues, and I could probably get an education for a career in the green economy sector. However, when I look beyond personal actions that I could take, I see that my country does not offer me all the potential of a green economy. The US government and businesses still have not invested in green economies like Europe and China. Green jobs are out there, but still represent only a small fraction of total employment in the US.

The thing is I know that I’m included, at least in some part, in my green economy. But, I also know that there are so many others in my own city and in my own country that continue to be excluded through lack of education and job opportunities. The green economy is such a small part of my countries’ economy, that it is not possible for everyone to equitably be included. So take a moment today (consider it your contribution to World Environment Day) to think about whether you are included in your green economy, and to think about who else is not and why.