It’s officially less than one month until the Olympics. Twenty-nine days to be exact. (Not that I’ve been counting…) Ever since I’ve been young, I’ve loved the Olympics. From the moment the Opening Ceremony starts, I’m glued to my television set- through all the events, the award ceremonies, and straight through to the Closing Ceremony.There’s nothing like it in the world.

Dramatic juxtapositions mark every event of the Olympic Games. On one side, there’s joy. Extreme joy. Displays of happiness like none other, as athletes celebrate their long awaited victory, as they finally realize that all of their dreams have finally come true. At the same time, standing near them is an athlete in despair. The athlete bent over in anguish, tears streaming down their face, as they realize that their lifelong dream of winning Olympic gold might be gone for good. 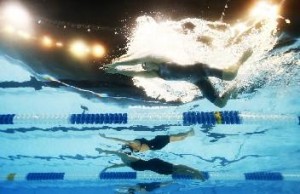 While devastating, that’s the beauty in the Olympics. Some win, some lose. Not everybody can win that coveted gold medal. But everyone at least has the opportunity to try. Or can they? Due to the recent movement to reinstate sex testing back into the Olympic games, there is a possibility that some female athletes might not be able to after all.

Sex verification is nothing new. The International Olympic Committee (IOC) first introduced it back in 1968, amidst emerging questions about the fine line between sex, gender, and athletes in the world of sports. During that time, female athletes were subjected to a series of degrading physical examinations in order to verify their sex before competing. Due to complaints over the invasive and humiliating procedure, the IOC decided to choose something more technologically advanced- the chromosome test. From that point on, sex verification took place based on the chromosome test, which analyzed the athlete’s individual chromosomes instead. However, many geneticists fought this testing too, stating that it was far too simplistic of a test. The Committee was further humiliated during the 1996 Atlanta Games, after eight of the female competitors failed the original chromosome test, but were later cleared during a physical examination, as it was determined that seven of the eight were born with an intersex condition. Luckily, all were then allowed to compete. Then there is the story of Caster Semenya.

During the world track and field championships held in Berlin, Germany in August 2009, eighteen-year-old Caster Semenya was nearly stripped of her gold medal victory in the 800 meters. It wasn’t because she was disqualified. Or involved in some type of scandal. It was because track officials thought she might have been too “masculine” to compete in a women’s event. 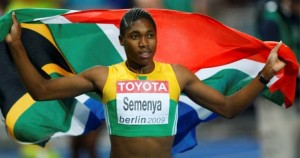 Semenya won the gold medal in the 800 meter race, beating her competitors by more than two seconds, with a time of 1 minute, and 55.45 seconds. However, she soon realized that she might have to hand back that medal, as the International Association of Athletics Federations was planning on conducting a sex discrimination testing to determine whether Semenya was eligible to compete as a woman. What brought on this investigation? Semenya’s husky voice. Her muscular build. And the fact that she beat her fellow competitors by over two seconds in the race. Luckily, Semenya “passed” the sex discrimination test, and was able to keep her gold medal. However, it became a public relations nightmare for the International Association of Athletics Federation, and sex testing was officially abolished by the IOC from the 2000 Sydney Games.

However, last Friday, the International Olympic Committee posted a new set of regulations, as a supposed improvement on the old sex discrimination tests. The new regulations will determine whether women are able to compete based on hyperandrogenism. Hyperandrogenism is marked by the excessive levels of androgens, like testosterone. Meaning, if a female athlete’s testosterone levels are too high (translation: if they reach the normal level for a male), then they will be unable to compete in women’s events. Why? Because the IOC believes that this will lead to a competitive advantage for those women.

Science can only take you so far. While science offers evidence, it can’t offer solutions, especially on a topic as tricky as sex discrimination. While it is true that testosterone can increase one’s size, strength, and endurance, there is no evidence that proves that an athlete with a higher testosterone level is actually more successful. Another problem with sex discrimination testing based on testosterone? In the words of Katrina Karkazis, a senior research scholar at Stanford’s Center for Biomedical Ethics, “We don’t even what typical testosterone levels are for elite females”.

Sports are about rules, I understand that. However, women with hyperandrogenism have done nothing wrong. They haven’t cheated. And they’re not taking any shortcuts. They have sacrificed, practiced day and night, and dedicated their whole life to their sport, just like any other Olympic athlete. Why punish them for something that is completely out of their control?