Mascots, mascots, mascots. They’re everywhere. High school, college, and professional teams alike circle around their beloved mascots during the “big game” as a beacon of tradition, hope, and luck. Some mascots are funny, and some are plain strange. (There’s such thing as a banana slug? And a dancing tree? Check out UC Santa Cruz and Stanford for further information…) Unfortunately, it’s not all fun and games when it comes to mascots. Welcome to the offensive, degrading, and even outright racist. Welcome to the land of Native American mascots. 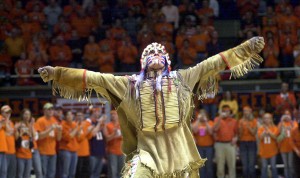 change the logo of their stereotypical Native American mascot, the “Warrior”. They were fine with the nickname itself, but they said that the logo itself had to go. The logo was the image of a stern man, who had two feathers sticking out from his head. Essentially, it was the most stereotypical perspective of a Native American that one can come by. What brought on this student initiative though, at this point in time? The last straw for the girls had come when a new student group was sanctioned to cheer for games this year, which coined itself, “The Reservation”.

For weeks, the battle raged on at Hall High School, as opinions were split between the current students and alumni alike. Many people were attached to the logo, and felt no need to change it. It was a source of both pride and tradition for the high school. However, others disagreed, stating that the time to change the logo was long overdue. In the words of Hall English teacher Scott Ferguson, “”Anytime that you take a complex race of people and reduce them to one stereotypical image that many people legitimately feel upset about — that, to me, is cause enough” for change”. In the end, the girls won out. The nickname will remain the same, but a new logo will be instated at Hall High School in the fall.

New school, old story. The same dilemma has taken place time and time again in schools across the country. Since 1970, about two-thirds of all Native American-related mascots have been eliminated from high school, college, and professional sports teams in the United States. Just last month, a decision was made by the Oregon State Board of Education to ban all Native American based mascots in the entire state of Oregon. Any Oregon school whose mascot is the Braves, Chiefs, or Indians is mandated to change their mascot by 2017. While it was decided that the nickname “Warrior” is to be allowed, all Oregon schools with the nickname “Warrior” must completely sever the ties between any Native American traditions and school insignia. 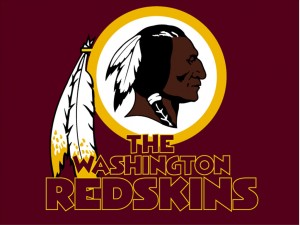 Indians, Tomahawks, Redskins, Chiefs, Braves. We’ve heard them all. It’s just a mascot, isn’t it? Why the need to focus simply on Native American-related mascots? Why not ban all mascots stereotyping certain ethnic groups? Why not fight against Notre Dame’s athletic department who choose to call themselves the “Fighting Irish”? A common complaint in the whole mascot dilemma is that such groups or ethnicities should take pride, not offense, in the fact that teams want to honor them. However, the problem comes with representation.

Do a quick Google search of “Native American mascots”, and you’ll find a plethora of logos featuring war paint, headdresses full of feathers, and even bow and arrows. A quick glance through the first couple pages and you’ll soon come to the belief that all Native Americans are blood-thirsty savages. While such cartoon-like logos may seem harmless, they’re anything but. The mascots perpetrate centuries-old notions of what it means to be Native American. The representations are often offensive, and even racist.

Traditions are a beautiful thing, there’s no denying that. However, there’s a reason why groups continue their fight year after year. There’s a reason why the National Congress of American Indians created a campaign over five decades ago to end the negative stereotyping of Native Americans in the media. There’s a reason seven Native Americans fought against the name “Washington Redskins” with the U.S. Patent and Trademarks Office two decades ago. And there’s a reason why individuals like the two senior girls from Hall High School are still fighting the battle today. How long will this battle rage on before we all finally realize that it’s the right thing to do?