While chocolate might taste sweet, it’s history is anything but. There is a long history of exploitation and unethical practices surrounding the West African cocoa beans used by “Big Chocolate” corporations such as Hershey, Kraft (which recently bought Cadbury), Nestle, and Mars. There are news reports of unfair pricing. Poor working conditions. There are even reports of forced child labor, as thousands of young children are bought and sold through human trafficking rings, and then forced to work on the cocoa fields, kept away from their homes and families. The children are overworked, often working up to 100 hours per week in dangerous conditions. The harsh reality is that the cocoa industry has been plagued by human rights issues for years. However, there is one company, which stands out from all the rest. It values things such as fair trade, sustainable farming practices, and ethical working environments. Its name? The Kuapa Kokoo Cooperative, which was founded in Ghana in 1993.

Kuapa Kokoo is a farmer cooperative made up of small cocoa industry farmers from West Africa. It is a 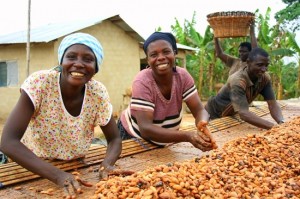 stakeholder in Divine Chocolate, which means that the cocoa farmers own a majority stake in the company, thus allowing them to share in the profits. In the cooperative, all 45,000+ member owners of the cooperative receive a 45 percent share of the profits for their cocoa beans. They also are given the opportunity to benefit from financial services and assistance from the Kuapa Kokoo Credit Union. The thought behind such services is to empower the small cocoa farmers. Social, economic, and political empowerment is the ultimate goal in this partnership.

One of the keys to Kuapa Kokoo’s success is its Fair Trade certification. Just two years after the company was founded, it became certified as a FairTrade producer organization in 1995. What exactly is Fair Trade certification? Fair Trade certification ensures that the cocoa beans are harvested in such a way that ensure certain environmental, social, and economic standards are met. It means farmers will receive a fair price for all of their cocoa beans due to the FairTrade minimum price, which is placed on all products. And the benefits don’t stop there. Due to the extra income that comes in due to the Fair Trade products, citizens in the small farming communities have been able to invest back into the community with social projects such as improving water and sanitation, working on healthcare, and building new schools.

The company’s success is due to the pride in which it gives its farmers. The farmers in the cooperative feel a great sense of pride at the fact that they are all partial owners of the company. They’re able to make their own decisions, elect their own officials, even have weekly meetings. They’re not simply puppets, whose strings are being pulled at every whim and desire of a big name “Big Chocolate” figureheads. They’re in charge of their own destiny.

Such stories of hope and success, pride and profits, gave the Kuapa Kokoo cooperative a way to break into the British chocolate market, which was dominated almost completely by Cadbury back in 1998. In the words of Paul Buah, the elected president of the Farmer’s Union, “We went into the market with a fantastic story that no one had ever told up to that point about the Ghanaian farmers. And it gave consumers a way of participating in changing the terms of trade by eating chocolate. It was the first time people could be in partnership—and not in a charitable sense—with people in a developing country to create an outcome they [both] valued.” 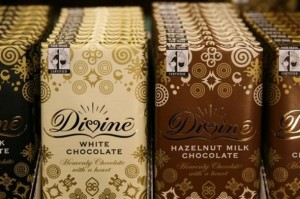 I’m the first to say that I’m a cheapskate. In nicer terms, I like to be frugal with my money. If I put two similar products side-by-side and realize one’s cheaper, I’m generally going to go with the cheaper one. However, there are times when I need to step back and realize that my role as a consumer is marked by the thousands of little decisions I make every day. Should I go with the slightly cheaper chocolate, sold by a multinational corporation, who gives little regard for the lives of the cocoa farmers in which their beans are produced? Or the Divine Chocolate bars, which are slightly more expensive, yet guarantee Fair Trade practices? In the end, I reach for the Divine bar. Because when I reach for that Divine chocolate bar, I’ve landed myself a pretty great piece of chocolate. However, I’ve also managed to show my personal values with that small action. I’ve showed that I value safe working environments, ethical working practices, and sustainable farming. I support fair pay, and acknowledge the benefits that will come because of it. To be a consumer is to have the power in your hands. Don’t let anyone or anything let you forget that. What kind of consumer do you want to be?