There’s a moment in many social situations when you simply don’t know what to say. Someone has misstepped their boundaries, violated your beliefs, and you don’t know how to respond. The moment hangs in time, as an internal battle rages in your mind. Should you stay silent, stewing in anger? Do you say something? Is it worth it? What will people think?For me, the moment usually follows when someone makes a mistake. Makes a fool out of himself. Does something stupid. And then those dreadful words march right out… “what a retard”. My head whirls around, locked on the culprit. Do they not realize what they said? Do they even care?

I wasn’t always aware of the word, and its damaging ramifications. Never one to use it myself, but at the same time never one to do something when it was said. That all changed when I became involved with Special Olympics Pennsylvania through my school several years ago, when I first learned about the Spread the Word to End the Word Movement. 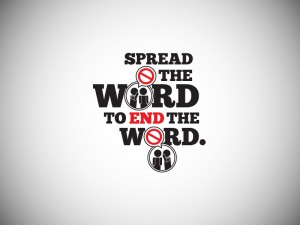 the Special Olympics Global Youth Activation Summit. The goal? To encourage people to stop using the words “retard” and “retarded”. The campaign celebrated its 1st Annual Spread the Word to End the Word Awareness Day on March 31st of the same year. Now, every March, people make the pledge to remove such words from their vocabulary, while also encouraging others to do the same. What started as student initiative turned into a nationwide campaign, spreading from school to school, before rolling over into the professional world, the entertainment industry, and even the White House. In 2010, President Obama passed Rosa’s Law, which eliminated the use of the words “retarded” and “retardation” in federal health, labor, and education laws.

It wasn’t always like this. Originally the terms “mental retardation” and “mentally retarded” were simply used as a way to describe a specific clinical condition. However, the words have taken on an entity far removed from their original meaning over the course of time. They have become synonymous with words like dumb. Stupid. Idiot. What’s the problem? The problem is that using such language does affect how people view those with intellectual disabilities. It does affect how people with intellectual disabilities are treated throughout society. To equate the “r-word” with words like dumb or stupid is to promote a certain stigma, and continue a cycle of negative perceptions. It allows people to disregard those with intellectual and developmental disabilities. It allows them to disregard their worth, and their contributions to society.

Therefore, the Spread the Word to End the Word movement has worked tirelessly to raise awareness about the removal of the “r-word” from everyday language. Its goal is to make people realize the damaging consequences that occur as a result of using such language. According to Soeren Palumbo, a brother to a sister with an intellectual disability, “I don’t think you understand how much you hurt others when you hate.  And maybe you don’t realize that you hate.  But that’s what it is; your pre-emptive dismissal of them [people with intellectual disabilities], your dehumanization of them, your mockery of them, it’s nothing but another form of hate”.

Words have have power. Infinite power. Maybe that’s the craziest part of it all. Words have the power to do good, but they also have the ability to do deeper damage than you could ever imagine. Pledge to ban the use of word “retarded” from your vocabulary. It’s such a minor change in your everyday life. However, it makes a world of difference in the lives of so many with intellectual and developmental disabilities.