For those of you that don’t know, the Pew Research Center conducts surveys on public opinion (among other things) with the goal of providing information on the issues, attitudes, and trends shaping America and the world.  One of their most recent publications as part of their Global Attitudes Project, the branch of the center that conducts worldwide public opinion surveys, focuses on public opinion in Egypt one year after the Arab Spring began, and the results were pretty interesting.

The study found that two out of every three Egyptians wants democracy in their country, and 61% think democracy is best-suited for solving the country’s problems, though a significant percentage would prefer a leader with a strong 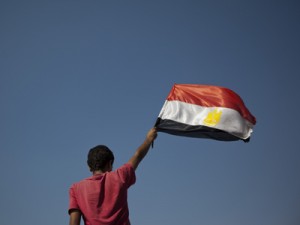 hand.  What makes these findings more interesting, however, is that 66% want Islam and the Quran to be the basis for the country’s laws, and 61% would prefer Egypt model its new government after Saudi Arabia rather than Turkey (the Saudi Arabian government system is rooted in Islam, whereas Turkey is secular).  The Muslim Brotherhood is viewed very positively by the majority of Egyptians, as is the Brotherhood-affiliated Freedom and Justice Party, which is the largest party in the new parliament.  Though there is a strong emphasis on Islamic government and implementing law based on the Quran, however, most Egyptians also endorse specific democratic rights that do not exist in Saudi Arabia, including freedom of speech, freedom of the press, and equal rights for women.

Improving law and order is one of the top priorities for Egyptians, with six-in-ten considering it very important, while eight-in-ten consider improving the economy to be a top priority.   Only 27% of people described the country’s economic situation as “good,” compared with 34% in 2011, though 50% do expect the economy to improve in the next year.  Overall, Egyptians are mostly optimistic about the future, with 52% saying they believe conditions will improve.

So what does all this information mean?  Well, it’s very interesting that most Egyptians would prefer a democratic 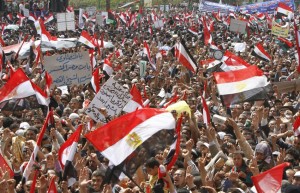 government system with democratic institutions like freedom of speech and equal rights that is rooted in Islamic values and traditions, as those two systems have not historically gone together.  The two systems are not incompatible, as many scholars have argued, but in practice there are few truly Islamic democracies.  In the 2011 Democracy Index, for example, no Islamic democracies are considered “full democracies,” but at best “flawed democracies” or “hybrid regimes.”

Whatever the form of government may be and whether or not Egypt can implement a true Islamic democracy, however, the country is facing a lot of difficult issues.  The economy has deteriorated since the beginning of the Arab Spring, and the population has been suffering.  At this point millions survive on bread and fuel subsidies, and the number of Egyptians classified as impoverished has increased by 4.2% since 2009.  The military controls a large portion of Egypt’s GDP, and any attempts to reform the economy or transfer control over to the private or public sector could result in conflict. Also, the new government will have to ensure that the benefits of economic growth reach all segments of the population, lest another revolution spring up and unseat the new government.

What do you think will happen in Egypt?  Can there be a true Islamic democracy?  What can the government to do improve stability and economic conditions?  Let me know in the comments box!