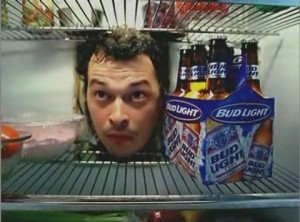 single year. Commercials are here to stay. And what are some of the most popular, comedic, and yet sexist of all types of commercials? Beer commercials.

It is important to note how gender roles have played out in beer commercials, both historically and culturally. For example, in the 1950s and 1960s, beer commercials mostly consisted of a white, heterosexual couple, shown only in the home. The couple was always in a committed, monogamous relationship, and beer was tied to the separation of work and leisure. Beer became a way of unwinding in the comfort of one’s home after work. However, a change occurred in beer advertising in the 1970s and 1980s due to the changing historical context. During this time, there was a period of intense anxiety for the white, male subject as he struggled to come to terms with threats to his male authority due to the women’s, civil, and LGBT rights movements that were occurring throughout society at the time. Therefore, drinking was taken from the household, to more public locations such as the bar. Women disappeared from beer advertisements, as the bar took on a clear separation between work and home. Drinking became a reward for a long, hard day at work, and symbolized a male’s fleeting freedom before returning to the confinements of home. However, the historical context has changed once again. Currently, drinking is no longer tied to work at all, rather it is an activity to be done simply for recreation and leisure.

It’s obvious that such representations are not beneficial for women. However, they’re not good for men either. It builds unattainable roles of masculinity that a man cannot reach as hard as he tries. It mocks anyone who does not uphold society’s interpretation of what it means to be a powerful male figure. And it teaches him that there is a very clear right way, and a wrong way, to achieving masculinity. In contrast, females are placed in one of two opposing roles- as the fantasy, sexual object or as the constraining wife or girlfriend. The wife and girlfriend are those the men are in committed relationships with who pose a threat to the male’s freedom. In contrast, the “fantasy” woman are put in place to serve as potential prizes for the men’s victories. Attainable or not, they are placed in the advertisements to be an object of male desire. In an extreme case, the ultimate fantasy female is turned from a person into a keg in the popular Heineken commercial called, “Draughtkeg”. The female’s body is used as a keg, where her only role is to keep the glasses flowing. She conveniently has no ability to speak, or even think.

Take a close look at recent beer commercials. Notice the gender roles that are playing out. The underlying messages about masculinity and femininity. And what it means for greater society. Realize that commercials are not simple entertainment, but are cultural transmitters of societal norms, stereotypes, and values.