Recently, the World Bank has received attention from the media because they are about to appoint the new president. This is the first time that the World Bank has been subject to a competitive process. Previously, the U.S. president selected it. There are currently three candidates for the position, Ngozi Okonjo-Iweal, Jose Antonio Ocampo and Jim Yong Kim. The World Bank comprises two institutions managed by 187 member 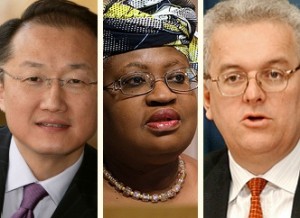 countries: the International Bank for Reconstruction and Development (IBRD) and the International Development Association (IDA). The IBRD aims to reduce poverty in middle-income and creditworthy poorer countries, while IDA focuses exclusively on the world’s poorest countries. These institutions are part of a larger body known as the World Bank Group.

All the candidates have different backgrounds and different suggestions. But will this bring any significant change to the work of the institution? I have previously written about the International Monetary Fund and how it functions. I claimed that no matter what candidate was elected, the structure of the IMF would not allow for any relevant changes or democratization. The IMF and the World Bank have very similar structures. The responsibility for the oversight of the day-to-day operations of the World Bank rests with a Board of 25 Executive Directors (EDs), who work at the Bank’s headquarters in Washington, DC. Five Executive Directors are appointed by the members with the five largest numbers of shares (currently the United States, Japan, Germany, France and the United Kingdom). The other Executive Directors are elected by the other members.

As any commercial bank, the country that gives more money is the one who has the greatest voting power and gets to appoint the executive directors. Even though the institutions are not democratic, they are experiencing a serious shift of power but it is coming slowly and progressively. Several countries have more recently acquired enough shares in order to have single representation on the Bank’s Board (e.g. China, Saudi Arabia), while the majority still participates in multi-country chairs.  The two pillars of the international economic system have been run by the wealthiest nations of the world. Indeed, there has been a historical trend were the president of the World Bank is American and the President of the IMF is European.

Given that they have such similar structures and have such high levels of cooperation, what is the difference between the World Bank and the IMF? Most people have only the vaguest idea of what these institutions do, and very few people indeed could, if pressed on the point, say why and how they differ. Even John Maynard Keynes, a founding father of the two institutions was confused by the names: he thought the Fund should be called a bank, and the Bank should be called a fund.

The fundamental difference is this: the Bank is primarily a development institution; the IMF is a cooperative institution that seeks to maintain an orderly system of payments and receipts between nations. Each has a different purpose, receives its funding from different sources, assists different categories of members, and strives to achieve distinct goals through methods peculiar to itself. However, even though the IMF’s goal is solely to regulate international financial markets, it still gives out loan when countries are experiencing a difficulty in their balance of payments (i.e. international debt). Of course, the loans are provided with many conditions. This forces the IMF to interfere in the development policies of the countries, and thus the differences between the World Bank and the IMF become more blurry.

In matters of finance, the World Bank is an investment bank, intermediating between investors and recipients, borrowing from the one and lending to the other. The IBRD obtains most of the funds by market borrowing through the issue of bonds (which carry an AAA rating because repayment is guaranteed by member governments) to individuals and private institutions in more than 100 countries. Its concessional loan associate, IDA, is largely financed by grants from donor nations. Despite Lord Keynes’s profession of confusion, the IMF is not a bank and does not intermediate between investors and recipients. Nevertheless, it has at its disposal significant resources, presently valued at over $215 billion. These resources come from quota subscriptions, or membership fees, paid in by the IMF’s 182 member countries. While the Bank borrows and lends, the IMF is more like a credit union whose members have access to a common pool of resources (the sum total of their individual contributions) to assist them in times of need.

I think that no matter who’s appointed as director, the World Bank will continue to run as it has done in the past, because it depends heavily on the actions of others international organizations, especially the IMF. Any significant change will come progressively, as more developing countries acquire voting power and representation. The five leading countries will no longer be able to run the bank as they wish; they will be forced to cooperate with China, the Middle East and some Latin American countries such as Argentina and Brazil. We are moving into a multipolar world, and this will be more and more representative as the years go by. For now, we can expect the development assistance of the World Bank to continue as it is.