Next Thursday the International Monetary Fund (IMF)-the international organization that oversees the global financial system- will have to elect a new Managing Director (MD), after Dominique Strauss Kahn’s (former MD) resignation. The two candidates for the position are France’s economy and finance minister Christine Lagarde and Mexico’s central bank director, Agustin Carstens. They both have outstanding resumes and seem to be highly competitive for the position. 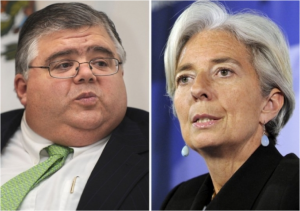 Since its foundation, the IMF’s managing director has always been a European male. Lagarde (a woman), and Carstens (from a developing country), could therefore bring a new approach to the institution. But to know what is at stake in their candidacy, we need first to understand the institution.

To begin with, all the members of the IMF are countries. To become a member you have to give at a certain quota. Each quota is the amount of currency that each member contributes to the overall fund.  Thus, the IMF can be thought of as a great big international credit union with all of the countries of the world as members. Currently, there are 187 countries, which includes practically the entire world.

The size of a country’s quota is a function of the country’s economy (see here). Presently, the largest quota is of the United States and accounts for 16.8%. The next largest are Japan (6.2%), Germany(5.8%), France and United Kingdom (both with 4.3%). Controlling 16.8% of the votes, the US is the only country to have a veto power in the organization. It can be used when there are decision requiring an 85% majority vote-such as changing quotas, hence influence- at the fund.

All of the power of the IMF comes from the Board of governors, comprised generally of the finance ministers or directors of central banks of the member countries. As they only meet once every year, they delegate most of the decision making to a smaller Executive Board, consisting of 24 “Directors”. The five members of the IMF with the largest quota automatically get to appoint a Director to the Executive Board. There are fewer directors as there are member countries, therefore many directors end up representing more than one country.

This executive board is the one who has to assign the next Managing Director, therefore it is the board that both Lagarde and Carstens are looking to persuade. As stated previously, the countries that are most important to persuade are the United States, France, Germany, Japan and the United Kingdom, as they hold a large portion of the voting share –because they have the largest quotas- and therefore they have the greatest voting power. This legal framework is unlikely to enable the selection of the candidate based solely on meritocratic terms. Indeed, in the IMF money is power; the winner will represent the candidate that best represents the interests of those countries.

It is most likely that the US and the European countries will support Lagarde, for two reasons. One is that the most important IMF’s loans are in European countries (Greece, Ireland, Portugal). On the other hand there has been a historical tacit agreement between the US and EU(European Union) that the director of the IMF will be European and the director of the World Bank, American. Cartens faces a tough competition, even more because developing countries such as China, Brazil, India, and Argentina remain undecided as to which candidate they will support.

In either case, what does the position of managing director entail? The way the IMF decision-making is structured, the managing director has little power. She or he will chair with the executive board and advise it, but every executive decision is in the hands of the board. With its largest shareholders being the United States and Europe, the fund is bankrolled by those it must now monitor most closely (European nations). So if a representative of a country on the fund’s board is dismissive of a reports findings or of a policy, the Managing Director, either Lagarde or Carstens, can only sigh with frustration.

The IMF was founded in the Bretton Woods conference, just after the second World War. As explained, it is ruled by the countries with the largest quotas. However, global economic power is shifting and its rules have become updated. Developing nations need to have better representation and more power in the decision making.  So far, the tentative to reform is pretty slim (see table).

One thing is for sure: as long as the IMF is run as a commercial bank, where money is power, it will only represent the interests of the wealthy. This has caused the failure of many of its programs and it is why it has failed to accomplish its goal. Even though it is a global financial institution whose functions are essential in today’s globalized economy, it should not necessarely be run as one. Further democratization is needed.

Julia Naime is a research intern at the Sisgi Group. During her internship she’ll research about international economics and the environment. Originally from Mexico, she moved to New York City a year ago. She’ll soon graduate from New York University with a major in Economics. To learn more about the SISGI Group, visit www.sisgigroup.org