When was the first time you really understood war?  Growing up I was in love with historical fiction novels.  From the earliest conflicts with Native Americans, to the Civil War, to World War II, I learned so much about past conflicts from the stories I read, the problem that arose from this type of learning, however, was that I always placed the concept of war and conflict in the past.  I never really understood the reality of current events until 9/11.  Having just turned eleven, this was my first real encounter with the concept of modern war.  Thinking about myself as an eleven year old, I was in no way equipped to understand the multi-cultural, -political, -economic, and –religious perspectives of such a traumatic event.  But my case,  is unique compared to the other children across the world who must deal with the constant threat of war and conflict as it is a part of the daily reality.

The documentary Promises shows how Palestinian and Jewish children face this exact reality from such a young age.  As a Peace Studies student, I’ve spent a lot of my college career studying world conflicts and most importantly, looking for solutions.  Most recently, we looked at a new approach to finding peace in the Israel/Palestine conflict. The documentary Promises was made by an American Jewish filmmaker in Israel/Palestine.  From 1995-97, he follows the stories of seven children, four Israeli and three Palestinian, between the ages of nine and twelve.  The filmmaker (known as B.Z.) documents the lives and perspectives of children living on either side of the conflict. 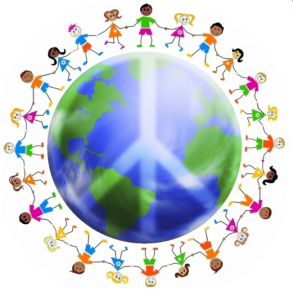 world perspectives) understand the intricate history and current realities of the conflict.  It was clear that from birth, these children had been surrounded by the passionate opinions of their older family members and communities.  The indoctrination of values from both sides was so complete that these children never had school with, played with, or even spoke with children from the other side of the conflict.  In my turn of the twenty-first century American childhood, I can’t even imagine living parallel lives with another group of children and never saying one word to them.

The point of the film Promises became clear when B.Z. was able to convince some of the children to meet one another.  This is the important break-through of the film that I want to discuss in a wider context.  When the children were able to meet one another, talk about shared interests, play games, and also eventually talk about the hurt and pain the conflict has caused both side’s families, they were able to see one another no longer as enemies but as friends.

I want to highlight the importance of this movie in and of itself, because of the message it sends, but I also want to take the example set in the film Promises and see how it might be applied on a wider scale.  Is it possible to start looking at children as the way to peace in seemingly unsolvable world issues?  As I’ve stressed in my other posts, I believe education and being informed are truly the most important things as it relates to so many different situations.

Using education for peace is a realistic and exciting new concept.  If we could get each side of the issue to truly be informed about the other side’s perspective, tremendous strides toward resolution could be made.  And if those individuals that were becoming informed were children, the next generation of leaders and policy makers would be coming from an open-minded and sympathetic point of view, making the possibility for peace one hundred times more likely.

In the last two decades, peace through education and exposure has been spreading as a viable option.  The organization Seeds of Peace provides an opportunity for exceptional young people from conflict regions to come face-to-face with their historic enemies in a safe and constructive summer camp in Maine.  The point of this program is to foster an understanding of mutual goals and desires that both sides share. By working with these youth, Seeds of Peace hopes to create the next generation of leaders in Peace.  When your enemy has a name, a face, and a story you can no longer look at the conflict from a single perspective.

Seeds of Peace is an incredibly important program that has spread to establish year-round leadership programs in 27 countries.  Solutions to huge conflicts can absolutely be found through raising awareness through films like Promises and creating an actual action plan like with Seeds of Peace.

It is an incredibly sad reality that children around the world do not have the luxury I had, of believing for so long that conflict was a phenomenon of the past.  We can do our part to support youth living in conflict regions by donating to organizations like Seeds of Peace, but also by making sure that we too are as open-minded to other sides perspectives, whether it be with a co-worker in the office or with another nation in world affairs.  Awareness building and understanding are very important steps to sustainable solutions.