Turn Out the Lights

Last month, Jenna Talackova was banned from competing in the Miss Universe competition due to the fact that she is transgender. After finding out about her past, officials promptly took Jenna out of the running, causing uproars along the way. Social media websites devoured the story, news sources kept people constantly updated, and gay rights advocates charged ahead in full force. I recently wrote a post about the conflict and how it deeply infringed upon the rights of a very strong willed contestant.

Over the past few weeks, though, the issue has taken a complete turnaround. In fact, Jenna is now competing once again, and the official rule policy for the contest is in the process of being altered. Talk about a big (and 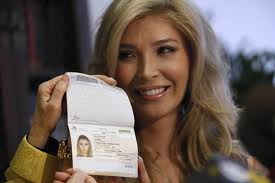 quick) step forward. And who’s behind this change?

GLAAD (Gay and Lesbian Alliance Against Defamation), a nonprofit organization that acts as a strong voice for the LGBT community, spent time speaking with Miss Universe officials and Donald Trump, a co-owner of the competition. Both entities worked together to allow transgender women to compete in the pageant and to re-qualify Miss Talackova. Both Jenna and Donald Trump were interviewed on various TV shows, including 20/20 and The View. Miss Universe claimed that the issue at hand was a serious one and that they wanted to be quick in taking action to correct it.

Now, I have somewhat of a hard time believing that officials and Donald Trump came up with this idea on their own. I don’t want to knock them too hard because, after all, they did make the change. Let’s be honest, though, they got some terrible publicity after the incident. Tens of thousands of names went onto petitions and even the Miss Universe website’s Twitter feed was full of protests. The public raised their voice, and a solution was formed. My point in saying this is that we made a change in reference to LGBT rights happen fast. What’s more, we shouldn’t stop here.

In New York City, transgender people can still legally be fired from their jobs simply for being transgender. Laws like this one exist in all places, shapes, and forms. We made one rule change, and while it might just be in regards to a beauty pageant, it’s still a competition that gets a huge amount of coverage. The amount of sources that covered this story is huge and varies from the Huffington Post to Twitter to GLAAD, and many, many more. My hope is that this fiery passion and motivation to see quick success will not fade as this single story eventually escapes our thoughts.

Obviously, people want to see equality. You would not have seen a change like this happen if that statement wasn’t fact. With that being said, let’s keep the ball rolling. If we can get a global entity to accept transgender people, maybe we can speed up the process on changing laws and rules in other areas, too. Let’s be honest, these laws will eventually change, regardless of when it actually happens. Gays are gaining the right to marry; the LGBT community is becoming more prominent; the majority of Americans support gay rights. This is a fact, but there are still an unfortunate few that will not give up their fight. I want this story to emphasize the fact that if enough voices are raised on a single issue, it can be changed for the better. Jenna and her story helped us all learn a lesson: you and I both have the power to promote equality and change lives. If you signed a petition, sign another; if you made a tweet about Jenna, make another about equality; if you posted on Facebook, talked to a friend, shared your news source, or did a relative search on the internet, do it again. There is no reason to stop because the problem has not yet been solved. How hard is it to set aside 30 seconds to raise awareness about LGBT rights to your friends, family, and followers? Take it upon yourself to make our world a better, more accepting place.