Have you ever imagined being the President of the United States?  I haven’t really, it stresses me out just thinking about the competing responsibilities.  Maybe you’ve been a die-hard environmentalist, or a strong businesswoman, or an unfailing pacifist up until your inauguration, but no matter how true you are to your convictions there will be inevitable issues that come up that encompass multiple policy areas and cause you to juggle competing, and equally important priorities.

The U.S. Commerce Department’s decision announced on Tuesday that it would apply 2.9 to 4.3% tariffs on solar panels imported from China is a recent example of how one issue can command multiple attention in different policy arenas.  This tariff comes as a result of speculation that the Chinese government has provided subsidies to solar panel manufactures, and if the Commerce Department finds through their investigation in May that the Chinese government is found guilty of dumping solar panels into the U.S. market at prices below their real costs, the tariffs could rise significantly.

Chinese solar panels in the U.S. market create both positives and negatives.  The President must weigh the 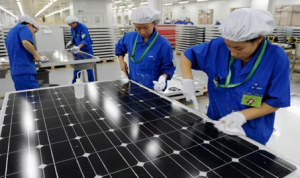 interests of both American producers and American consumers, the interests of environmental activists and energy realists, and big stick fighters with carrot stick negotiators.

Manufacturing subsidies and dumping are considered illegal by international trade agreements established under the World Trade Organization, but these illegal market steals have been one of the biggest ways China’s economy has been able to grow so quickly. Economically, Chinese solar panel imports now make up half of the U.S. market.  Foreign companies dominating U.S. markets poses a large economic problem for the U.S. President.  In 2005, the U.S. was importing $21.5 million in solar panels.  Last year, that amount grew to $2.65 billion.  The low prices of Chinese panels have certainly hurt U.S. manufacturers.  Three big solar companies went bankrupt in August, as low-Chinese costs lowered the cost of solar energy by two-thirds in the last four years.  One of these companies, Solyndra, has been in the news as congressional Republicans criticize the Obama administration for putting $500 million into an unsuccessful company.

The U.S. solar manufacturers’ request to investigate Chinese subsidies could lead to the most extensive review of market domination from Chinese subsidized imports.  The President’s administration’s approval of such an investigation clearly shows their support for American producers and their prioritization of producer side economics.  Still, the cheap Chinese prices do benefit solar panel installation companies, solar energy using businesses, and solar energy consuming households.

The low price of solar energy has helped make alternatives to fossil fuels a reality, and help in the U.S. clean energy initiatives, another policy arena that commands attention.  With the ability to purchase relatively cheap, renewable energy, the U.S.’s has a greater potential to be a greener nation.  There then comes a balance of putting economic policy or energy policy at the forefront of the government’s agenda.  In putting energy or environmental policy first, the subsidies imposed on China would be little to none, as bringing affordable clean energy options would be top priority.  If economics were the main focus of the nations’ policies, the tariffs would be high enough to make a significant decrease in the Chinese share of the U.S.’s solar market, allowing domestic producers to manufacture at market rates.

The Obama Administration not only faces criticism from clean energy advocates, but also from economic protection proponents who would like to see the tariffs be as high as 20-50% to significantly lower China’s ability to overtake the domestic market.  Additionally the Obama Administration is met with conflicting criticism on its diplomatic interactions with China.  Some argue that the subsidies indicate a strong stance preventing Chinese domination, but others argue the relatively small price of the tariff does too little to China’s unfair trading practices, and shows a position of political weakness.

This issue incorporates three of the biggest policy topic in Washington, economic policy, energy policy, and diplomatic policy.  When one issue converges with three equally important policy areas, how do policy makers pick which one to prioritize?  In this case, cheap Chinese solar panels provide affordable alternatives to fossil fuel, helping to alleviate our country’s emission of excessive greenhouse gases.  However, cheap foreign imports mean domestic producers become less competitive and are driven out of business.  In such a fragile economic state, factory shut downs and job losses are hugely important for the policy makers in power.  In addition to this balance, the President and policy makers must consider how their decisions affect their diplomatic relationship with China.  Trying to balance a position of strength with open communication, the U.S. has struggled to find the appropriate approach to diplomacy with China over the last half-century.

All in all the issue of Chinese solar panel subsides shows the massive complexities in balancing economic and energy priorities as well as maintaining a position of strength against global competitors.  So if you were the making the decisions, what would you do?