About every three days it becomes necessary to take out the trash in my roommates’ and my kitchen.  And on this trip down the hall, we take our brown paper grocery bag full of recyclables.  We diligently separate out our plastics, making sure we do our small part to contribute to the recycling movement.  However, when I shut the door of the trash room, with our one lone bag of recyclables separated in an undesignated bin, I know deep down they’re about to just be combined with the rest of the trash.  I’ve searched nearby apartment buildings and asked friends about their recycling systems, but no one seems to be confident in their ability to recycle in their home.  So with no real outlet to place my plastics, I stick to the ignorance is bliss philosophy, hope for the best, and naively assume that someone will be responsible enough to keep my plastics from entering the trash heap.

Research is now finding our typical view of six-pack plastic rings strangling or choking fish in the ocean may not
be the biggest threat our plastic pollution is causing.  Science is finding that plastics do actually break down and at a pretty rapid rate.  The traditional view that it would take high temperatures and hundreds of years for plastic 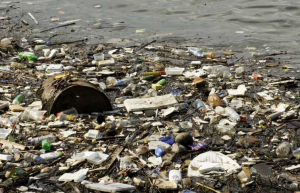 to disintegrate is now being undermined.  Plastics in the ocean are decomposing in cooler temperatures at much faster rates.  Big win for environmental activist groups?  Just the opposite.  The break down of plastics in the ocean releases dangerous chemicals into the water that are harming fish and have a great potential to harm humans as well.

The chemical bisphenol A or bpa has gotten a lot of attention in the last few years, with increasing labels for bpa free water bottles and baby food, consumers have started to become aware of the potential cancerous effects of the chemical contained in plastics.  Plastic was already threatening sea species with 44% of seabirds consuming plastics in the ocean, and up to two hundred and sixty marine species eating plastic, usually mistaken as other sea creatures, such as plastic bags for jellyfish.  Now, marine life faces a new invisible threat with the chemical pollution that is spreading throughout their habitat.

Determining the harmful effects of solid plastics in the ocean has always been a challenge, but now, with the invisible threat, it is exponentially harder to detect the presence of chemical pollution in our seas.  The conservation group 5 Gyres has made an attempt to estimate the amount of physical plastics in the world’s ocean.  Researcher Stiv Wilson estimates conservatively that in 2010 there was 315 billion pounds of plastic in all the oceans.  Most of this waste lies 90 feet below the ocean surface.  Efforts to clean the oceans are almost totally unrealistic, for hundreds of tankers and billions of dollars would be needed to sweep the entire Earth’s water supply.

With the new spread of plastic chemicals to sea creatures, next in line in the food chain are humans.  We might think about buying that bpa free water bottle at the corner shop, but do we think when we’re out to eat at a nice restaurant about the hazardous chemicals the fish on our plate could be putting into our body?  Although the research is unclear, some would argue for totally elimination of seafood in our diet.  The CBS Sunday morning show featured the hazard of plastics’ disintegration into our ocean this week. They highlight some of the key ways we can reduce plastic pollution, calling on the individual efforts to make the largest impact.

Several steps can be taken to reduce your plastic contribution.  First, buy items with the least amount of plastic packaging.  Use recycled cloth bags with shopping.  Attempt to recycle properly in categorized bins and at depositories that have a good reputation for following through with recycling.  Be more diligent at finding legitimate recycling centers (this is definitely the area I need to improve on).  Although you may think you’re doing a great job with recycling, many misconceptions exists about the recycling process.  For example, not every item that has the recycle arrows is actually recyclable, so be careful in following the number labels to really determine which of your products can be thrown into the bin.

In addition to the attempts of individuals, larger scale projects are underway to solve the plastic soup dilemma.  Creative solutions to appropriately use recovered waste have suggested the burning of ocean plastic for fuel.   Others call for the cooperation and support of plastic generating companies to contribute to the costs for clean up.  And still others attempt to solve the problem through legislation.

Whatever your passion level lies in commitment to ocean conservation and ocean species preservation, there is an undeniable link now shown through our plastic waste and our exposure to harmful chemicals.  Let the uncertainty be a motivation to do each of our small parts to help mitigate and reverse the effects of plastics in our oceans.