Not long ago I wrote a blog post on the changes that President Obama wants to bring to universities.  Many of his changes revolved around student loans, and helping young people get the best out of their higher education experiences.  The president has been calling for education changes in rapid succession, and recently asked 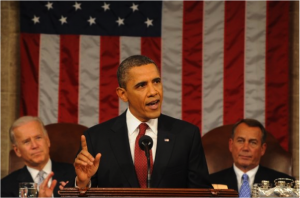 Congress to create a fund that would train students attending community colleges for jobs in fast growing industries.  In an era where the economy has been a major cause for contention, the president has been trying his best to provide solutions at an educational level.  The question, as always, is will the changes bring about the necessary solutions?

President Obama laid out his community college plans on Monday, February 13th.  He appealed Congress to make an $8 billion fund that will train community college students for jobs in industries that are currently in high demand.  In the plan, known as the Community College to Career Fund, more than two million people will be trained for jobs in the healthcare, transportation, and advanced manufacturing industries.  Colleges will be given financial incentive and support through the fund to train students in the above mentioned fields.  Furthermore, the fund will help create paid internships for low-income students, and try to get community colleges to work with local businesses so that students have an opportunity to obtain long-term jobs in their communities.  Essentially, all three aspects of the fund are linked to one another, starting off with community colleges being provided with financial incentive to train students.  Local businesses and industries will also receive support so that they can identify in what areas they need workers.  Finally, the paid internships will give young low-income students a chance to gain hands-on experience in high-growth industries, and then land a job once graduating.

There are a few highlights to the Community College to Career Fund, and they are important to look at when assessing the strengths of the program.  First and foremost, the fund is targeting a myriad of students from low-income backgrounds, and shows that President Obama is thinking of higher education from various angles.  Not only did he talk about financial assistance for students in universities last month, but he is also thinking about students who attend community schools.  It is extraordinarily important for the president to remember that millions of students attend community colleges and vocational schools, and they cannot be left out of the financial changes he plans on bringing to the education system.  In order to help bolster the economy, the president and Congress need to focus on all student demographics and education opportunities.

However, it is slightly disconcerting to see how President Obama plans on utilizing the $8 billion in the fund.  The money is to be distributed within community colleges, internships, and local businesses, making it seem as though the fund will be stretched rather thin.  The question is whether or not the fund will be able to adequately support the thousands of community colleges in the United States, and also be able to support the high-growth industries that the president is targeting.  Furthermore, the president has already asked Congress for financial support in regards to other universities, Pell Grants, and various loans.  There is a chance that Congress may not agree to finance so many funds due to the fact that it has been divided in where federal money should be allocated.

Nevertheless, the Community College to Career Fund is a remarkable financing endeavor, and it is wonderful to see President Obama focus on all tiers of the higher education system.  There is no reason for universities to receive financial incentive, and community colleges to be neglected by the government.  As the changes to the education system are being planned out, it is interesting to see what the president has outlined and where he believes the government should get more involved.  If nothing else can be said, at least government spending is being increased for the education sector; a phenomenon that should have occurred long ago.