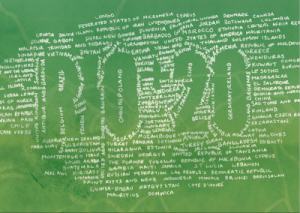 remains highly ambivalent and subject to many interpretations. The current discussions are all revolving around the three driving pillars of sustainable development: the environmental, the societal, and the economical. There will be seven main issues addressed, of which you can learn more of here.

One major achievement of the 1992 Rio summit was the conclusion that governments alone could not achieve sustainable development. Civil society needed to be represented and separated into different categories. As a consequence, Agenda 21 formalized categories through which all citizens could participate in the UN activities on achieving sustainable development. Those categories are now called “major groups” (they include, woman, children and youth, indigenous peoples, etc.). Major groups are allowed to present statement as well as to directly participate in the conference. This will definitely make the conference a more transparent process, but it will be harder to reach a consensus because more interests are at stake. For example, Australia has noted that mining was a green job and an excellent example of sustainable development, but I am sure that many indigenous groups would oppose this statement because mining affects their way of life (for an example: Huichol people in Mexico).

So far, the preparatory meetings have lead to a zero draft (available here), that has created a wide arrange of reactions from member countries. The discussions have been heated and for now, a reasonable consensus seems difficult to be reached. There’s a major divide between the North and the South. Developed countries have insisted that the Zero Draft has to be short so that it could be “understood” by the public. Developed countries such as claimed “brevity at the expense of content?”

The draft contains mainly passive verbs such as “we recognize”, “we support”, “we encourage” and “we endorse”. This indicates that the current (weak) political commitment will not likely increase. Furthermore, the draft lacks proposed methods to enforce implementation of the objectives. Indeed, without a description of necessary steps to be implemented or without reliable indicators, there will be no significant improvement towards sustainable development. Those are key aspects that need to be considered in the last preparatory meeting that will be held in March. Member states have to increase their commitments and be clearer on the goals to achieve if Rio+20 is to be a success. If they don’t, it would be better to call Rio+20 not as “The Future We Want” but “The Future We May Want To Consider in the Future”.