The UN Secretary General chose a 22 member panel in 2010 to create a new blueprint for global sustainable development. At the end of last month the report, “Resilient People, Resilient Planet: A Future Worth Choosing,” was released to the public. Focus areas of the panel include the conservation of our planet, global equity, lessening poverty, and, not surprisingly, fighting gender inequality. The report states that “real choice is only possible once human rights, basic needs, human security, and human resilience are assured.” People cannot make sustainable choices without the power to direct their own actions.

I want to discuss the aspect of creating gender equality in order to progress global sustainability. While the fact is obvious, it is often overlooked and not even thought about: women make up about 50% of the world’s brainpower. That means that if all women were treated and respected on the same level as men, we would be 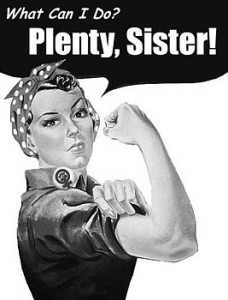 reaping billions of more effective and innovative thoughts daily. Women in some countries are not allowed to leave their house without male company, much less speak their minds to the public. Who knows if it’s likely, but
what if one of those women had come up with a strategy to eradicate global poverty? What kinds of ideas and improvements are we missing out on by not pushing women’s equality more than we already are?

Women’s access to jobs, credit, markets, and property are unequal to men’s in an eye-opening number of countries. The UN’s report suggests that removing these barriers for women will finally let them contribute to sustainable development that includes social stability and economic growth. Currently, women hold less than 20% of all seats in national parliaments. You might find it amazing that women make up only 7% of environment, natural resources, and energy ministers; they account for only 3% of science and technology ministers.

What many fail to realize is that factual evidence has shown that when women hold a greater number of seats at any one table, collective needs are put at the top of the priority list. This means that if women were the majority of environment ministers, global access to clean water would likely be addressed with the utmost importance, as well it should be. Another fact that makes me cringe- due to gender discrimination, female agriculture workers in rural areas do not typically have the same access to productive resources as men do. If they did, it is estimated that the percentage of undernourished people in the world would be reduced by 12 to 17 percent.

The report makes a list of suggestions on how to improve women’s rights around the world. However, the list is made up of proposals that we should be doing, not how we should go about doing them. One recommendation the panel makes is for women in underdeveloped nations to be given the right to own and inherit property and have equal access to credit and other financial services. This would obviously put our global economy in a better state, but what steps would make this a reality? Another recommendation is to give women equal say in political decision making. This seems like a no-brainer, but how will we make that change wide-spread when it is not even consistent in western countries where women do have rights?

Should we start by improving women’s rights in countries where they are almost equal to men’s? Women in the United States have equal rights, but their pay rate is lower than men’s and they are not equally represented in the political arena. Would it be hypocritical to try to influence other countries to improve their equality when ours is not full-blown? It might be more effective for “complete equal rights” countries to assist women around the world in order to portray an ideal image or example. However, I almost feel ashamed to say that we should fight for equal wages in the United States before focusing on fighting to give other women the right to go out in public on their own.

My only answer is to try to find a global solution collectively. I think that countries supporting women’s rights should portray themselves as works in progress. I believe that it would be beneficial for Westernized countries to reach out to those where women are treated unequally by showing that they, too are not yet where they want to be. These countries should display their faults and emphasize how they are going about fixing, improving, and resolving them. By showing our own errors and weak points as Westernized nations, I think that the countries in great need of improvement will not feel patronized or targeted, but rather as if they are a part of a group initiative; they are included in the fight toward global improvement. As Americans, why flaunt how advanced or egalitarian we are when we, too, have our down-falls. We should not be putting ourselves above others; we need to reach out and join forces in the movement toward sustainability.

It overwhelms me to think about finding logical and sustainable solutions for problems that are so deeply engraved in our world’s history. Obviously there is no easy fix to granting gender equality, but I do think that joining forces, rather than forcing others, would be the most effective way to go about achieving this goal.