How many people know what the word femicide or feminicide means? If you google the word, you won’t find a formal definition besides the ones that Wikipedia gives.  These range from the feminist perspective, which describes it as misogynist murders to broader terms such as “all killings of women, regardless of motive or perpetrator status”.  So we don’t really use this world because most of us don’t live in an environment where this world is use colloquially.  But what happens with people that are forced to live in an environment where femicides are not only common but has become part of their social environment?  Yes, no one really knows because of the low coverage these crimes receive; for some of us they’re as foreign as the communities they 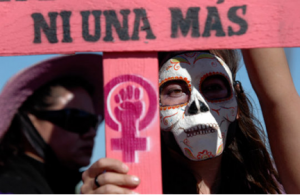 Ciudad Juarez, Mexico is one of the most dangerous cities in the Western Hemisphere and the city with the highest number of femicides.  Since the North American Trade Agreement (NAFTA) came into affect in 1994, Ciudad Juarez has experienced about 600 femicides with at least 3000 women missing.  Because women are seen as the weaker working force in their community, they have become a greater target for crimes such as harassment, rape and homicide.  And because of the increasing number of jobs that were created after the NAFTA, the number of women working in maquiladoras increased as well.  The concept of maquiladoras has a long history between the U.S. and Mexico, but the easiest way to think about them are as factories run abroad by U.S. companies in order to get cheap labor (and because Ciudad Juarez is right at the border in the Mexico side, it’s easy to see why it has become bombarded by these maquiladoras).  The connection between this free-trade agreement and increasing number of femicides in Mexico can seem far-fetched.  The connection with people that live in suburban America and these cases can seem even stranger.

Yet, I think that communities are not only intertwined within their country, but I also believe that communities in different countries affect one another.  Whether it’s directly or indirectly, we need to be more aware about how our behaviors affect those miles away from us, like the women in Ciudad Juarez.  Lately, people have become increasingly concerned about where they get their food and if it’s fair-trade in order to help ameliorate working conditions in developing countries.  But what about where everything else comes from and what effects the demand of these products have on other countries?

Ciudad Juarez is home to about 80 members of the Fortune 500, which indicates that these companies are not only growing but also are the largest among all companies.  These companies are relocating manufacturing plants to places like Ciudad Juarez for cheap labor, but forgetting about other effects this has besides the cheap labor.  Some of these renowned names that have outsourced labor with maquiladoras in the Mexican-American border include Johnson&Johnson, Dell, and General Electric (teamNAFTA).

Families in Ciudad Juarez see these giant factories in their backyards, which provides for more job 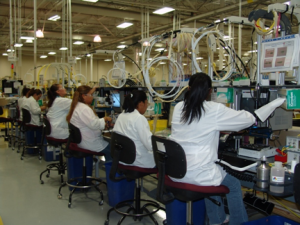 opportunities, but which also brings them increased insecurity.  These maquiladoras are in effect the space where women are harassed and victimized.  Although women are seen as the weaker working force compared to men, women are also seen as more complacent to work schedules, amount of hours and wages which makes them a specific target to hire at these factories.  The working conditions however are not only below those in the U.S., but also make these women vulnerable to crimes committed against them.  Around the world there are places where people are being exploited in all areas of production, but here we have a specific city where it has become a vicious and continuing cycle that is seen every day.  It is not the case of one victim over 10 years, but it is about recurring femicides in Ciudad Juarez of women who all work in maquilladoras.  Of course there are other factors that include lack of police force and government intervention, but those things are more directed toward the ability of the Mexican government.  Should American companies also think about these cases when outsourcing for more profit? I think so.   Should people be more conscious about these maquiladoras, which create an environment of violence toward women even more than the one they already live in?  I should hope so.

So what can a middle-class suburban family do in America?  I think that people are not aware or conscientious enough to make appropriate decisions that include more than just knowing where your coffee is coming from.  In today’s world with increasing globalization, I think that we should focus more on the effects that our purchasing decisions have on others, including foreign communities we might not relate to at all.  It’s also about knowing the companies that produce the goods we are demanding and buying and knowing that awareness can create a great impact amongst a collective group of people.  Creating a large protest against these huge companies might not have an impacting effect on the families of these dead women, but being informed can create awareness and promote different behaviors for companies that rely so greatly on us.