American children face a new and exciting environment, especially in their preschools and elementary schools.  The faces, languages, and cultures of children in our country are incredibly diversified, offering a huge opportunity for kids to learn about families that are different from theirs.  In large part, this diversity is being embraced, as is evident with the growth of bi-lingual schools.  Schools may be more willing to promote and teach about the varieties in different families’ ethnicities, but only if that family also contains different gender parents.  If our nation hopes to continue its legacy as a place of acceptance and diversity, is it not necessary to find a place for same-sex parents in the discussion of different family compositions?

Conservative estimates suggest 2 to 7 million children are being raised by non-heterosexual heads of household.  Children from same-sex parents entering pre-school probably have limited understanding of the 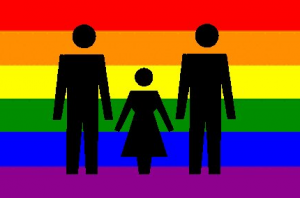 difference between their family and their classmates’.  Additionally, students who come from heterosexual parents could possibly have little to no exposure to a same-sex family structure.  In these instances, schools can begin to play a role at a young age in teaching acceptance.  A lot of attention has been placed on bullying of LGBT youth (and rightfully so), but children coming from same-sex families also face difficulties feeling like they fit it.  Whether its parent-teacher conferences, PTA boards, attending a school play, or cheering at a basketball game, parents are extremely involved in a child’s school environment.  The acceptance of their parents in their school community is of considerable importance to a child’s educational experience and chance at success.

Especially in states with legalized same-sex marriage, public schools are seeing it as their role to start educating students at a young age about diverse family compositions.  There are numerous areas in the school where same-sex parents are calling for change.  For example, on the posters of families that line the halls and classrooms, same-sex parents would like to see their family composition represented.  Also, on gender sensitive holidays like Mother’s Day, which occur during the school year, two father households can feel excluded, and schools have begun to solve this problem by using gender-neutral language such as celebrating “Family Day”.  Additionally trainings from liaisons in the gay community are being offered to teachers to assist in student understanding as well as creation of a safe school space for families of all make-ups.  Finally, school affiliated groups are attending gay pride activities in certain communities.

Expanding on this, some cities have explored the idea of gay and lesbian Parent Teacher Associations (PTA) to offer an important sense of community for parents across schools who feel isolated in the school environment.  I believe this organization could have a powerful impact in opening conversations and creating a safe space for families to discuss their concerns for their children in school; however, just as is taking place in Garden City, NY, I believe these groups need to accept participation of heterosexual couples as well as be open to families who are still resistant to exposing their children to diverse families.  Inclusion and open dialogue are key in creating real solutions to tolerance issues on school campuses.

Some significant fears and dilemmas arise when moving toward school acceptance of same-sex parents.  One of these dilemmas is the issues of custody.  Schools often need consent or verification from biological parents or legal guardians.  When same-sex couples have children, only one or neither of the parents has a biological tie to the child.  Many same-sex parents face difficulty legally adopting their partner’s biological child.  This can create huge problems within a school bureaucracy, and students may have trouble having a simple field trip permission slip signed by the person they call mom.

Additional challenges are present when same-sex couples are no longer together yet both parents continue to raise the child separately.  Again legal issues present themselves, as well as added emotional problems for the student facing a two home situation.  To overcome these legal difficulties, it is best for parents to be open and honest with school administrators and teachers, but in an age where LGBT persons are getting fired from jobs and denied housing because of their sexual orientation, parents fear the repercussions of admitting their sexual orientation in schools (including the loss of their child that they have no legal claims to).

Tackling the promotion of non-traditional families within the school context can cause administrators and teachers to struggle to deal with the topic of sexual orientation without overtly dealing with more explicitly sexual topics that are not age appropriate.  Moreover, at these young ages, children are beginning to identify their own gender and differences among sexes in a social setting.  In this way, educators also need to tackle the stereotypes of gender roles in society and allow children to understand their own gender without causing confusion or pressure.

It is important in this discussion of same-sex families in the school community to explore the challenges but also the solutions.  It is so important to the young children of our country to expose them to as many types of diversity that exist in our society as possible.  This includes different family compositions.  When students are educated and families feel comfortable, open communication and a safe learning environment can be created.