You might not think it, but I bet that almost everyone reading this will make use of corn today. I’m not necessarily talking about chowing down on a buttered corn on the 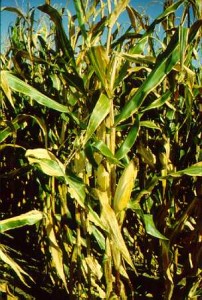 cob. Corn is a component of about 25% of groceries from the supermarket. It is also a major component in almost all fast food products, and has recently become a major player in our nation’s energy markets.

To say the least, the U.S. has learned to rely heavily on corn to power everything from our bodies to our cars. Even the cattle that are used for beef consumption and milk production are fed a daily regime of corn. Yes, the chickens and pigs, and just about all other animals that we eat are also fed corn. We all know the famous adage, “Don’t put all your eggs in one basket.” However, this is exactly what our nation is doing. Oh yeah, eggs too are closely connected to corn.

The U.S. has, and continues to put all of its eggs in one basket. Corn is planted on over 80 million acres of land here in the U.S. Corn also makes up 96.7% of feed grains, meaning just about every farm-bred animal in this country is fed corn. The U.S. continues to promote the harvesting of this commodity with government subsidies and mandates. Under the Energy Policy Act of 2005, the U.S. government requires that by 2012 7.5 billion gallons of biofuel – usually ethanol – will need to be mixed with our gasoline in order to reduce the carbon monoxide content and increase the octane rating. Much of our ethanol is produced from corn. Furthermore, the Farm Bill Act allocates an enormous amount of subsidies to growers of corn.

So what does this all mean for our nation’s economic system? Overdependence on a single commodity leads to vulnerability. Since so much of our life depends on corn, if the supply of corn was unexpectedly reduced for any reason our nation could be in serious trouble.

We all remember the Irish Potato Famine. The Irish people relied too heavily on a single crop, the potato, and when potato blight hit their crops leaving them with very little food, millions died of starvation and their economic system was shattered. People will say that the potato blight was the cause of the famine and the resulting problems. Wrong, the cause was the country’s overdependence on potatoes. While I do acknowledge that this is an extreme example of how overdependence on a single crop can damage a nation, I do think it serves as a valuable reminder for countries to not put “all their eggs in one basket.”

Imagine if a similar situation occurred in the U.S., and our corn supplies were greatly reduced. What would happen then? I believe it’s a matter of when, not if. We cannot control natural disasters, and we certainly cannot control weather. If our corn crops 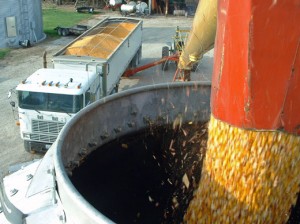 were largely reduced, the nation would be in serious economic trouble. Prices would skyrocket. Meat, milk, eggs, anything made with corn would be incredibly expensive. Even gasoline, because of its ethanol component, would rise considerably in price. Experts believe that a “corn shock” could lead to eggs that cost $3.50 and gas that costs the consumer $5 per gallon. Currently the cost of a bushel of corn is a little more than $6. Estimates show that a reduction in crops due to weather related problems such as a drought would send the price to above $8 a bushel, greatly affecting prices of numerous consumer goods.

What’s more is that if we see such a situation in the future, ethanol distillers would reduce their production of ethanol because of the high cost of corn. Once corn passes $7 a bushel, ethanol distillers will have a hard time turning a profit. If ethanol production comes to a halt, gas prices will leap. Rising prices in gasoline and food is the last thing our nation needs.

I suggest that we, as consumers, make a conscious effort to avoid purchasing products that contain corn (where possible). We need to find a way to slowly reduce our demand, so that our dependence on corn also begins to fall. I believe that if the government begins to see a reduction in corn demand, it will feel pressure to stop providing such large agricultural subsidies and mandates. If the subsidies begin to fade, we will notice a reduction in supply. I personally think that a reduction in both supply and demand for corn will greatly benefit this nation in terms of economic security. We cannot rely on the government to alter its allocation of agricultural funds. With such large lobbyist groups and corporate ties, the government will not change its funding anytime soon. Therefore, it is up to the consumer to reduce the demand for corn.

Corn has the potential to greatly affect our nation’s economy. Right now, we use it for a myriad of products, which is the problem. Overdependence on anything is never good. Let’s take those eggs out of our only basket and start spreading them around. As consumers, we have the power to make corn’s grasp on our country slowly wane. Let’s do so before it’s too late.