Doing Business at the Bottom of the Pyramid

This story had a happy ending. Unfortunately, that is not always the case. Médecins Sans Frontières (MSF) which provides medical assistance to some of this globe’s most 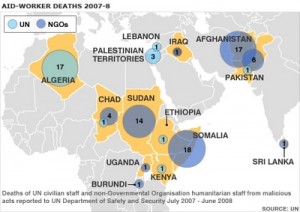 impoverished areas, just lost two of its workers in Somalia. Philippe Havet and Dr Karel Keiluhu were killed in Mogadishu, the country’s capital. As a result, the organization has had to scale down their operation to ensure the safety of its workers in this Northeastern African nation.

While to the American public these stories might appear as an interesting headline, this is the reality that aid workers around the world face on a daily basis. Unfortunately, studies are finding that the kidnapping of these humanitarian groups member has been rising in the last decade. In some nations like Pakistan incidents have been increasing at an alarming rate.

Aid workers are trying hard to provide assistance to the world’s neediest populations and at the most dire times. They are the first ones to respond to outbreaks of diseases, natural disasters and in restoring human rights to those denied. These men and women choose this work knowing that they will do so in difficult conditions where conveniences are scarce and obstacles abound. They also face many challenges including the lack of clean water, the abundant number of illnesses, the scarcity of resources and of course, security issues.

Usually humanitarian organizations employ international staff from around the globe and individuals from the host country to form a national team. This week a Kenyan aid worker employed by Care International in Pakistan and his local driver were reported missing and assumed to have been kidnapped by local vandals. This would bring the total number of kidnapped victims in the area to four. The others include a British doctor who worked for the International Committee of the Red Cross and two humanitarian workers from Welthungerhilfe. Aid workers are particularly vulnerable because of their association with developed nations in Europe and the United States. Most are held for economic reasons particularly ransom, while a rare few as part of militant’s political propaganda against the West.

In the latest Aid Worker Security Report, Afghanistan, Sudan, Somalia and Pakistan were listed as the most volatile regions for humanitarian workers. The report 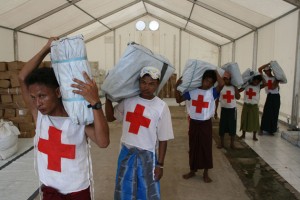 mentions that the number of violent humanitarian worker deaths has declined. However, it highlights that there could be many factors involved. The major one is the fact that there is less humanitarian staff available in those countries mentioned above. Because of the instability, major international non-governmental organizations place the minimum number of staff possible in those locations and have skeleton teams helping on the ground. Most of these are made up of national workers. This means that there is little security to protect those who remain on the field.

The sad truth is that those indirectly affected by this situation are the local people who need those organizations to survive. MSF, which was mentioned above, closed two clinics which had assisted over 80,000 children in the last year. Somalia’s increasing decent into lawlessness has made it too difficult to continue providing comprehensive services in parts of the capital.

While the local governments need to do their part to stop the violence and crimes against humanitarian workers, there are other ways to help. The Aid Worker Security Report states that we can also help by funding organizations like MSF, the International Rescue Committee and the International Committee of the Red Cross to fund additional aid worker security. Usually, individuals like to fund programs that will directly help those most vulnerable. However, if we don’t provide additional security to those on the ground, the aid will never make it into their hands.