Culture, customs, and traditions are what make the world a uniquely diverse place. As time has progressed, societies and their rules and values have changed due to the receiving of new information, innovative technology, and an increased awareness. Some traditions that are now known to be harmful and discriminatory, however, still persist in the world today.

Female Genital Mutilation is a procedure that entails injury to or the removal of part or all of the external female genitalia for non-medical reasons. Instead, social, cultural, and religious factors are what lead to 140 girls and women around the world being affected by FGM annually.

A parent’s reasoning for having their daughter circumcised can vary greatly. Making sure that their daughter is a virgin before marriage, preparing her for adulthood, following cultural tradition, or making sure that she is “clean” are all examples of what lead parents to this decision. As girls are born into and grow up in societies that practice FGM, they are taught that the procedure is necessary. It is engrained in their minds that if they are not circumcised, they will not get married; they will not have a life.

Anesthetics are not typically administered to infants, youth, or teenage girls when knives, scissors, scalpels, pieces of glass, or razor blades are used to mutilate their 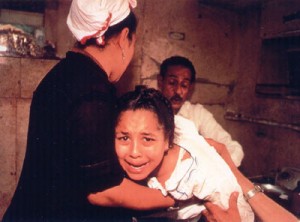 genitals. What’s more, the procedure is sometimes done to groups of girls, often using the same tool with no sanitation methods. It is no surprise that a plethora of health conflicts often arise from inflicting FGM. Bleeding to death, infection, emotional trauma, risk of HIV, infertility, and cysts are only a handful of the lifelong problems that millions of young girls are forced to endure.

Although FGM is mainly practiced in African and Middle Eastern countries, in recent years, it has made a presence in Western countries as well. Immigrants, still holding deep ties to their culture, have brought the practice of female genital mutilation with them to the United States, The United Kingdom, Australia, and other countries in Europe, to name a few.  Sometimes, girls are taken back to their home country for the procedure, and other times someone is brought in to perform the circumcision in the family’s home.

A severe problem with bringing FGM into Western countries, despite the physical health issues, is the fact that girls who grow up in these countries do not have the same mindset that their parents and grandparents did. These new generations are exposed to Western cultures and traditions, where boys and girls date freely, and having sex before marriage is not a punishable crime. The girls who undergo FGM outside of their home countries have a high risk of coming out of the ordeal burdened with depression and post-traumatic stress. They have little chance of continuing on with their normal, everyday life.

Teachers, neighbors, friends, family, and mentors should all be aware of what FGM is and what the signs of it are.  You might find it shocking that huge numbers of people in Western countries have never heard of FGM. Without knowledge of the problem, there can never be a solution. FGM should be talked about in elementary schools, middle schools, and high schools.  If FGM was put in the spotlight, I truly believe that the issue would become less severe in Western countries.

Another aspect of the problem is being able to reach all people who practice FGM in Western countries. Around the United States, for example, small pockets of cultures thrive within larger cities. Inside these enclaves live families who might never have any contact outside of their neighbors, friends, and relatives who live in the same community. With this being the case, old traditions are extremely hard to break. The possibility for a group to somewhat seclude themselves from Western customs can be fairly simple in these areas.

A feasible way to approach this problem is to have community outreach programs in areas where FGM occurs. Churches, after-school programs, and other public staples would be targeted by outreach groups as effective areas in which to educate people about the consequences of FGM. The outreach services would be conducted by individuals who come from the same culture as the ones whom they are reaching out to. By doing this, the outreach recipients will not feel threatened; they will have a stronger connection and deeper understanding of the person trying to help them and the issue they are addressing.

Overall, I believe that education will be the most important step in ending FGM in Western countries. People within cultures who practice FGM and people who have never heard of the procedure both need to be aware of why the issue is so severe. Informing the public and specifically reaching out to culturally distinct communities is a promising start to ending FGM.

Will you talk to your friends about FGM? Will you raise awareness at your school or your job in order to help countless young girls? What else could you do to end this problem in Western countries?