A few weeks ago I wrote a post about Syria and whether or not the international community should intervene and impose a no fly zone like they did in Egypt.  Well, today, some heartening news came from Syria:  Syria has agreed to end its crackdown on anti-government demonstrations, pull troops from the streets, and release jailed prisoners.  The agreement was reached through negotiations with the Arab League, which was one of the last diplomatic initiatives under way to end the uprising and crackdown.  Of course, many feel that Syrian President Bashar al-Assad only agreed to 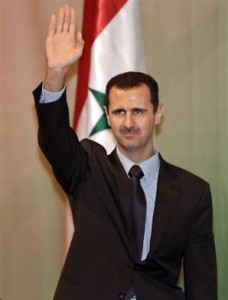 Arab League mediation to buy time, though this agreement did dispel some of those rumors.

Unfortunately, the announcement followed in the wake of another bout of violence, which left at least 20 people dead in the past 24 hours.  According to UN estimates approximately 3,000 people have been killed since the uprising began in March; clearly, some sort of cease-fire agreement was necessary.  This is not the first time, however, that President al-Assad has assured the UN that the violence against the protestors will stop.  Hopefully the pressure from the Arab League, as well as the international community, will force al-Assad to stick to his word this time, and the violence will truly come to an end in Syria.

President al-Assad’s previous history of broken peace agreements has caused the international reception to the proposal to be understandably tepid.  The United States, for example, reiterated its call for al-Assad’s resignation, despite the announcement.   The White House feels that President al-Assad has lost his legitimacy and must step down, not broker peace deals and submit to Arab League monitoring.  The Arab League opposition council stated that the Syrian regime is simply trying to buy time, and they wanted harsher conditions to be imposed on Syria to make sure al-Assad does not return to violence.  They suggested that Syria be suspended from the Arab League and that international protections for civilians be assured, the same measures that were taken against Libya months earlier.  The rest of the League, however, insists that the Libyan model cannot be repeated in Syria, and in fact al-Assad has told news sources that he will cooperate with the (Syrian) opposition, but if Western powers intervene (like they did in Libya) it would cause an “earthquake.”

So what does this agreement mean for Syria?  If al-Assad follows through—which, clearly, few believe he will—it will hopefully mean an end to the horrific violence of the past few months and an easing of tensions.  The proposal calls on al-Assad and his government to withdraw troops and artillery from the streets, release prisoners, allow the Arab League to send monitors into the country, and to begin negotiations with the opposition.  Exactly which opposition group that would be remains unclear, since there are a wide variety of unorganized opposition groups currently protesting the regime.  International journalists will also be allowed into Syria, and will be given free movement throughout the country so that they can document everything that unfolds.  The opposition groups appear to be happy with the proposal, stating that they will abide by the Arab League agreement as long as al-Assad’s government does, too.  If not, they will resume protesting. 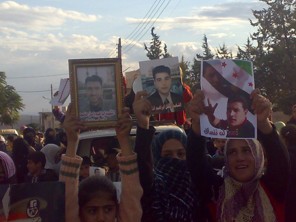 to an end; though Libya has received most of the media coverage, Syria has in fact been much more violent in its crackdown against protestors.  But given al-Assad’s history and the highly uncertain state of affairs in Syria, I cannot say with certainty that I think the violence will finally come to an end.  It could be that a cease-fire will not be reached until al-Assad has been taken down or flees the country.  What do you think?  Is this agreement a ray of hope for Syria, or will it be just another one of al-Assad’s broken promises?