The Math and Science Curse

Thousands of children, when they are young, play dress up as doctors, engineers or even researchers.  Young future doctors dream of curing their ailing patients of far-fetched imaginary illnesses while future engineers dream of designing innovative trains, planes, and everything in between.  Unfortunately, these youthful dreamers grow up, attend college as math and science majors, and a large percentage of them end up either dropping out or changing their majors to something completely un-science related.  The math and science “curse” has become a great source of worry for the United States ever since it became apparent that the U.S. lags behind other nations in those two fields.  For America, a lack of doctors and engineers can spell disaster since it means that sometime in the future the U.S. will fall behind other nations when it comes to creating new, cutting-edge technology.

As a once upon a time student of science, I too try to decipher the reasoning behind why I changed my major from genetics to history my sophomore year of college.  According to one engineering professor, many science oriented students change their majors because they find their own to be too difficult, realize other majors are easier to complete, and find their classes to be based on memorization and theory and not on 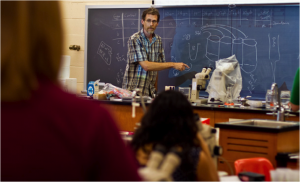 practical, hands-on work.  A combination of these factors, and many others, has caused science, technology, engineering, and mathematics (STEM) majors to leave their fields in pursuit of others.  However, if STEM students are resilient enough to continue on with their majors, many of them end up spending longer than four years in school.  A 2010 University of California Los Angeles research study revealed that STEM majors usually take up to five or six years to complete their degrees because of the degree of difficulty of classes, taking classes over again, and a plethora of other reasons.

Unfortunately, STEM majors are something that the United States is desperately in need of at this time.  In his 2011 State of the Union Address, President Barack Obama declared that the future of the U.S. would be in the hands of STEM students, and that education reform was necessary to help the students achieve success.  President Obama is most definitely correct in saying that education reform is imperative for making sure STEM students remain in the math and science fields.  Sylvia Hurtado, one of the UCLA research conductors, said that many high school students are unprepared for college level science classes.  In other words, high schoolers lack the basic foundations and rigorous teaching needed to help them excel in math and science classes taught at a university level.  Not only do students lack a strong foundation, they also lack resources to keep them interested in their classes and help them when they are struggling.  Since math and science courses are meant to weed out students who are not interested in pursuing engineering or medical fields in the future, there is a sink or swim tendency to teaching such classes.  Such a method of teaching is unsuited for many students who become overwhelmed by their classes, and thus end up switching their majors or dropping out of school.

Personally, I believe that there is a major problem in the U.S. with the STEM majors as well as science and math classes at a high school level.  University classes are incredibly difficult, and math and science classes can drag an honors student’s GPA through the mud which can lead students to feel anxious and unprepared for their classes.  Realistically, students are unprepared for college level STEM classes because they are nothing like what they have studied in high school.  In order to keep undergraduates interested and motivated in science and math fields, high school level classes must be restructured and thought over.  College is a difficult environment to adapt to for a first year student, and can become overwhelming if the classes are horrifyingly difficult.  For that reason, college STEM classes need to be more supportive towards their students and create a more hands-on environment that allows students to put their knowledge to test in practical situations.  If changes on an educational level do not take place sometime soon, more STEM students will continue leaving their majors and the U.S. will be producing less doctors, engineers, and innovators.