During recent years the Global South is experiencing a surge in foreign direct investments in agricultural land. Prompted in part by the food crisis, state and private investors are buying and leasing millions of hectares of farmland in Africa, Asia and Latin America. However, many large-scale land investments do not service the goal of ensuring equitable and sustainable food security.

It is a misconception that large-scale industrialized agricultural production and biofuel investments can ensure the environmental and developmental needs of the planet in a sustainable and equitable way. Land grabs pose serious threats to the human rights of host communities. By denying land users access to vital natural resources, large-scale 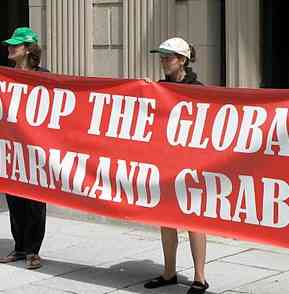 land investment may undermine local livelihoods. Land users face possible eviction from lands that have been cultivating for decades. Indigenous peoples and pastoral populations are being delocalized. Host populations face decreased food security as well as increased competition for land and water resources.  Not only populations are being delocalized but they are also being depleted of their resources. Indeed, most of the agricultural changes will be export-oriented.

This is not the first time something like this happens in the developing nations (read about Mexico). Under the flag of the “green revolution” and necessity to increase productivity, human rights are being violated.

The driving forces behind those large-scale investments are threefold. First of all, the price volatility in the global food market has led food insecure countries to realize the precariousness of their situation. The gulf states for example, whose water and soil resources make them heavily dependent on international markets for food, have invested a lot in Africa. Countries with food security concerns and fast growing population, like India and China, are also seeking opportunity to produce food overseas.

Second, the surging demand for biofuels has led investors to target vast tracts of land in developing countries for biofuel consumption. This increased demand is largely a result of ambitious targets that oil dependent countries have established for biofuel production and for increasing the proportion of biofuels in land transportation.

Finally, many large-scale investors, including Wall Street banks and wealthy individuals, have begun to view direct investment in land as a safe investment in an otherwise shaky financial climate. This is even more of a problem because those investors lack the expertise to manage land scale agricultural production. Land investments have become more attractive to private sectors financiers as a “hedge against inflation”.

Although many blame the corporations and the investment institutions for these massive land grabs, it is important not to forget that government must also be held accountable. Governments in the countries where those land-grabs are taking place are also responsible, they are not only spectators.  The states- both  the governments that host the investment but also the home states of the private investors-have an obligation to regulate the conduct of these investors abroad. If the governments don’t stand for the interests of the people who are being negatively affected by the foreign direct investments there won’t be any solution. Stockholder activism and any interest groups that want to protect the resources and the people have to demand more action from the governments too.