In Mexico, it is calculated that a little over 50% of the population is urban. Since the 1940’s, the urban population began to grow exponentially because of the lack of economic support for the rural population. In the last 50 years there have been important political and economic decisions that have given people large incentives to migrate, as they are forced to look for opportunities in the cities.

First of all, the agricultural revolution that started in the 1940’s by president Avila Camacho included a series of reforms that damaged already fragile rural and agricultural communities called “ejidos”. The ejido is a sort of communal land managed and controlled by agricultural workers. Camacho started the expropriation and reallocation of the best ejidos for the purpose of selling it to large landowners. By doing this, he sought to attract agricultural investors and improve Mexico’s agricultural productivity.  Indeed, many investments came. But these policies created profits for the investors only, because most of the money that was gained came back to the international markets (phenomenon that economists call capital flight). Therefore the increase in profits could not be redistributed to the workers.

It is possible that these policies gave some benefits to the Mexican consumer, but they definitely came at a great lost for the agricultural workers. The workers-now with no land and no money- were forced to look for other jobs either in the cities or as employees of the landowners. This gave birth to the first wave of rural migration. Successive governments did nothing to protect small local farmers either; thus, the migrations continued until the 1990’s. There was little aid given to the farmers and large support given to private companies. The hope was that the new investments and new technologies would bring more wealth to the average Mexican, because food production was expected to increase. Food production did increase, but most of the food was meant to be exported so it represented little gain to Mexicans.

In more recent years, the NAFTA agreement -signed in 1994- gave rise to whole new waves of migration. NAFTA is a free trade agreement that allows the free circulation of goods between Mexico, Canada and the US. With the agreement, the tariff that Mexico had set to US agricultural products (such as corn and beans) was canceled and therefore more beans and corns were imported into Mexico. Although this policy was highly beneficial for the already highly subsidized US corn producers, it was devastating for the Mexicans that worked in the fields. Mexican producers often could not compete with US farm technologies. This decreased the opportunities for agricultural employment in Mexico, which consequently increased Mexican illegal migrations to the United States. If they didn’t migrate to the US, many Mexicans ended up immigrating to the border cities and working in “maquiladoras” (assembling plants in the border 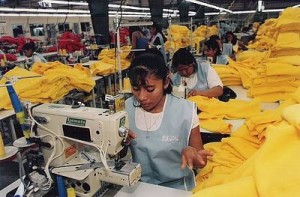 cities) that are infamous because of their human rights violation, labor abuses, discrimination, etc.

It is my impression that large urban growth and increased rural migrations have brought many unwanted consequences. Internationally, the migrations have brought more tensions at the US border. After NAFTA, more and more unemployed Mexicans wanted to cross the border. NAFTA allows the free trade of commodities, but not of people, in order to protect US jobs; therefore, it is an uncompleted free trade agreement. To decrease the negative impacts of this agreement (in respect to rural migration), it would be necessary to negotiate the free circulation of people too, or the reestablishment of tough taxes and quotas to the US farm producers. Mexican producers need protection and support of the national market to expand.

Domestically, the large rural unemployment of the country made drug trafficking the principal source of revenues for many rural workers. Many workers engaged in illegal activities and they are now part of Mexico’s most pressing social issue. Drug traffickers are not simply evil people that want to make profit; rather, they are also people for which little opportunity of development was offered, and as a consequence ended up engaging in illegal activities to survive and not migrate. Drug trafficking is a complex problem in Mexico and its solution requires careful analysis and smart strategies. But long term stability won’t happen until the rural lifestyle is economically safe.

How can we reverse the negative impacts of rural migration? The negative impacts of NAFTA have to be stopped, either by negotiating the free circulation of people too-so that migrants can have a choice as to where to go-, or the reestablishment of tough taxes and quotas to the US farm producers. Mexican producers need protection and support of the national market to expand. As to drug trafficking, it is a complex problem in Mexico and its solution requires careful analysis and smart strategies. But it is for certain that long term stability won’t happen until there is stability in the rural part of the economy, that is, until the rural lifestyle is economically safe. Neglecting the rural economy brought bad consequences to the country. Getting rid of these consequences will require large scale economic and cultural support of agricultural workers. This means supporting agricultural productivity of legal crops (and not a systematic elimination of drug fields, see Colombia’s case). Those policies are a necessary strategy  to stop illegal drug traffic and massive rural migrations.

Julia Naime is a research intern at the SISGI Group. She is a senior at New York University majoring at Economics. During her internship, she will research on rural and international development, environmental policies. To learn more about the Sisgi Group, please visit www.sisgigroup.org