A few weeks ago I wrote a post about the possibility of including factors besides GDP as measures of development, so I thought today it might be interesting to do a sort of case study on a country that has done just that.  I’m sure many of you have heard that

Bhutan, that small kingdom between India and China, decided to scrap GDP (well, not entirely—GDP and GNP are still factors, but not major ones) in the 70s and focus on GNH, or Gross National Happiness, as its measure of development.  Bhutan is still the only country to measure happiness and take that measure into consideration when developing policy, though the idea has gained in popularity in recent decades.  The UN now includes happiness in its millennium development goals (MDGs), and many countries are looking at the Bhutan model with interest.  So, is the GNH approach actually working?  Or is it merely utopian dreaming?

Well, the evidence seems to be mixed, and mostly depends on whether or not you agree with the statements that GNH is more important than GNP and that traditions and trust are as important as the pursuit of material gain.  Bhutan is a heavily isolated Buddhist kingdom—the first car arrived in 1960, and television was not allowed until 1999—and the government is trying very hard to balance modern capitalist consumerism with the traditional Buddhist lifestyle.  The government recognizes that a certain level of material comfort is necessary for people to be happy but discourages the ruthless pursuit of profit, preferring instead a more holistic approach to development.

Thanks in large part to this holistic approach to development, Bhutan is currently on track to reach the UN Millennium Development Goals by 2015.  The kingdom has already reached numerous targets, including reducing malnutrition among children, halving those without access to safe drinking water, and reducing the proportion of people living below the poverty line.  Quite a feat given that until fairly recently Bhutan was living in a medieval, feudal bubble.  Many believe that this rapid progress is due mainly to the similarities between the GNH approach to development and the MDGs.  Though the MDGs do not explicitly focus on happiness, both systems are guided by the ideals of freedom, equality, tolerance, respect for nature, and shared responsibilities.  Many of the GNH indicators the kingdoms policy-makers use correspond almost directly with the MDGs, such as education, health, and economic standard of living. 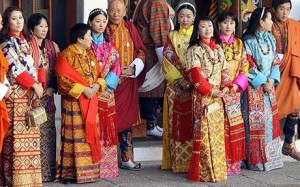 status, it is not without its flaws.  For one, it aims to preserve Bhutan’s ancient Buddhist culture at the expense of the kingdoms Hindu and Christian population.  Thousands of Hindu Bhutanese Nepalis are currently living in refugee camps after violent protests sparked by the government’s attempts to force out “illegal” immigrants, as well as the imposition of a traditional Bhutanese dress code and the Bhutanese language being made compulsory, all under the guise of preserving Bhutanese culture from foreign influence.  Also, many complain that the government has no right to decide what makes a person happy.  Happiness is subjective; economic development is at least more objective and measurable.  One person might be happy living a traditional Buddhist lifestyle, while another might be happy living a mostly capitalist lifestyle.

So, the GNH approach clearly has some benefits, as many Bhutanese are much better off now than they were 35-odd years ago when GNH became the country’s philosophy, 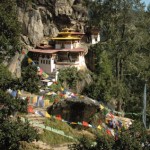 but it has its flaws too.  Several thousand Bhutanese are not currently living in the country to experience the happiness, and many of those within the kingdom chafe under the government’s declarations on what should make them happy.  And the western, consumerist world is approaching rapidly, especially now that television is legal.  As I said before, your evaluation of the GNH approach likely depends on your own personal evaluation of the importance of wealth, trust, and tradition.  So what do you think?  Should more countries adopt their own GNH system, or a modified GNH system not so focused on preserving traditional culture, or continue to focus mainly on GDP/GNP as indicators of development?