Chances are, if you haven’t been living under a rock for the past month, you’ve heard about Occupy Wall Street – a burgeoning movement that protests against economic inequality and corporate greed and has spread not only around the country but around the world.

Although the concrete goals of the protestors are not completely clear, the movement has already garnered widespread support. According to a recent poll, 67% of New York residents sympathize with the cause of the protestors. And this fact is not entirely surprising. As the picture of this article demonstrates, the share of income earned by the wealthiest 1% of Americans has increased from 10% of annual US income in 1980 to 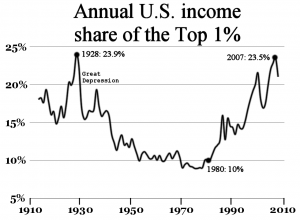 over 20% currently. As the rich have gotten richer, members of the middle/lower classes have either remained in the same financial situation or gotten worse off. Salaries of many workers in the middle/lower classes have decreased when adjusted for inflation, which has prevented them from being able to pay off their student loans or provide for their families. Others have been laid off and have not been able to find a job following the recent financial crisis.

When economic disparity continues to widen, one should expect civil disorder of some sort. Additionally, now that so many people have access to the internet and social media sources, people can more easily connect with each other and organize demonstrations.

I am very ambivalent towards the current protests. In some ways, I sympathize with many of the demands of the protestors and understand the reasons that they are so upset. I have also been waiting for a grassroots movement by the left that could serve to galvanize its base and counteract the paradigmatic shift to the right that the Tea Party Movement helped cause.

However, in spite of my accordance with many of the causes and demands of the movement, I question the direct targets of the protests. Throughout my internship with the SISGI Group over the past several months, I have been trained to understand that trying to do good is not enough. Rather, we need sustainable solutions that can solve problems. I do not think the current course of action is necessarily the best way to enact change. I believe that the public has often unfairly vilified bankers. I understand it. Many do find loopholes and get around taxes. Many of them were greedy and took advantaged of lax regulations that eventually led to our downfall in 2008. They were bailed out after the crisis, and yes, because of their considerable wealth, they are able to lobby for favorable policies.

But bankers aren’t inherently evil people as the media often tries to tell us (well, at least the mass majority of them). Some may be a bit selfish and greedy, but almost all of us fall under that description. The truth is they do perform a valuable service in our capitalist society, and we can’t really grow businesses without them. They operate within a system of rules that many of them have the influence to create. But many people would do the same thing if they were in the position of the bankers.

If we are unsatisfied with the income disparity in this country, we need policy change. We need to regulate Wall Street closely enough that we don’t have a repeat of the financial crisis. To close tax loopholes for corporations. To raise taxes on the wealthy. To make sure that there is transparency in our government, in that we get to see exactly where monetary contributions to our political leaders are coming from. If we plan on pushing forward the interests of the 99%, we cannot do so just by complaining that the 1% is too fortunate. We must show politicians that we will not stand for corruption or deregulation in Wall Street. If we really want our demands answered, we must ensure that we have a Congress and President more concerned in helping Main Street than helping Wall Street. Change will not come by yelling at those who take advantages of the opportunities given to them. We must occupy Washington, not Wall Street.