Last year I spent some time backpacking through China, and I came away with some great memories from the trip. Apart from just memories, I also came home with a bag full of incredibly dirty clothes. Being in an urban city, I could not figure out why my shirts were always so dark by the end of the day. It took me a few days to realize that it 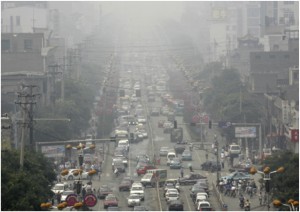 was the air pollution as I walked through the streets of Shanghai that was turning my clothes and skin brown, and not the constantly grey sun overhead.

From that experience, I couldn’t help but get a little excited when I read Christina Larson’s article about a Chinese city taking steps to fight pollution. In the northeast of China, the city of Shenyang has shown great successes in cleaning up their air and water. Taking a multi-angle approach, the city government made strides in cleaning the water supply and demolishing factories to rebuild them with improved technologies outside the urban central. Additionally the city has replaced personal coal stoves with natural gas as well as made investments in developing the mass transit systems. If this has shown to be possible in one city, can this be scaled up to more around China?

Shenyang’s success has been a combination of savvy business leaders and a bit of luck. The proximity to Beijing helped political leaders reach out for government money earmarked towards large-scale infrastructure projects. Politicians were able to bring together the leadership from government departments to push projects forward. They also recognized that downtown could benefit from a larger real estate market and retail spaces so the government decided to move rundown warehouses and factories to other locations. The initial investment in changing the area has been extremely profitable. This has solidified the idea that going green makes economic sense.

Despite having the right combination of business, politics, and forethought, why can we not expand this project elsewhere? Or are there lessons to be learned for other cities to work from? After all, every developed nation has gone through a phase of industrialization and heavy pollution. Most have emerged more or less with a retrospective awareness and China can do this too.

Unfortunately, there have been more examples of failed sustainability projects than successful ones in China. For example the “worlds first eco friendly city” Dongtan was commissioned for building outside of Shanghai in 2005. But it fell though due to lack of funding as well as a misunderstanding of cultural needs. While this project has quietly been swept under the rug, it is disappointing to see such a positive and grand investment fall wayside. One thing has become evident in the line of environmental preservation: “enforceable green building codes, with the designers’ and planners’ willingness to follow them, is very important…Such grand eco-city plans themselves are not eco-friendly,” as observed by Wen Bo, a Beijing-based environmentalist.

So, what can the take away lesson be from Shenyang’s successes? When comparing it to this single example of failure, I believe there are two. First, Shenyang’s improvements were successfully instituted through the local government, without foreign involvement. The politicians found a successful way to get the citizens on board by making smart economic and political decisions. The second success the politicians had in initiating eco-friendly decisions was to frame them within economic incentives. Just as Shenyang realized, the revenues from condos and retail space far outweighed pollution emitting factories. If China can begin heavily promoting economic policies favoring green decisions, I think they we will see substantial improvements in a number of environmental indicators. Shenyang shows that it is possible to motivate existing companies to abandon old technologies for improved and cleaner facilities. Similarly, with the rate of growth that China is seeing, the country can hold newly established companies accountable to adopt green policies, and avoid the learning curves of the old establishment.

China and the developing world are growing at an exorbitant pace. With these growth rates, we are going to have to find ways to keep our world sustainable for the future. Hopefully, countries will get onboard with projects promoting environmental regulations, and if Shenyang can maintain these policies, then they stand as a beacon of hope for the rest of China to follow.