Do We Need A New Measure of Development?

Do you know where your clothes were made? Whose hands picked the tomatoes you eat? How the items you use on a daily basis are manufactured? Your answer is probably no and the truth is that most of us don’t really take the time to find out. We might read the label stitched to our shirt or look at the tiny sticker placed on our shiny apple advertising where it was grown; but quickly shift our focus to something else.

So why is this important?

One more question. Do you love and crave chocolate? Did you know that tens of thousands of boys and girls work on cocoa farms in West Africa where they are abused, exploited and imprisoned? This is important because half of the chocolate we consume comes from this region, and a lot of it is being made by child slaves.

If we think that the goods we consume are not made by slave labor, then we are sadly mistaken. The truth is that a large percentage of the goods we use and consume daily are made by slave labor. The Department of Labor estimates that twelve million people in fifty-eight countries around the world are forced to work in inhumane conditions, where their will and freedom is restricted or completely taken away, and hope for freedom has waned. These twelve million individuals around the world are responsible for making many of the clothing we wear, growing a large percentage of the food we eat and creating the goods we use every day.

There is a thin line between cheap labor and the exploitation and trafficking of human being for labor purposes. While we might think items made abroad are made inexpensively because of a cheap labor force, many times it is actually due to slave labor or people who are forced into indentured servitude.

Even if something is manufactured in the United States, it is not free of these violations. In 2011, the largest human trafficking case in the country was discovered where it is alleged that coffee, pineapple, and fresh produce companies were enslaving men and women to work in their farms. In my home state of Florida, there have been 7 cases of slavery in the past decade in the agricultural fields. This is staggering considering during the winter months, Florida provides the majority of the produce for the Eastern United States.

According to a Department of Labor study, Americans don’t want to use products that were made using forced labor. The problem lies in that the U.S population is not well informed on the process of where their goods are acquired; therefore, they do not make smart choices in their purchases .

To begin to address this issue, United States government, specifically, the State Department’s Office to Monitor and Combat Trafficking in Persons partnered with Fair Trade Fund, a California-based non-governmental organization, to create and launch an initiative to raise awareness on this issue. It is called the Slavery Footprint, and it also 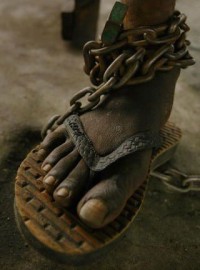 allows the general public to generate a calculation of their slavery footprint. This number tells the person the number of slaves that contributed to the creation of the products and goods that person uses.

Each person can take the survey which asks questions on their choice on food, and housing, if they own their home, how big it is, how many children they have, how many cars they have, and what goods they’ve purchased. On average the score is 55; however, in developed countries it can be much higher. Here is an example. If you’re a 20 year-old individual, who rents their home, owns a computer, a bike and several pairs of shoes your slavery footprint is probably 100.  There is also an app that helps consumers find out the slavery calculation as they are out shopping. Try the survey!

So how many slaves work for you?