We’re often taught in various fields of academia that we live in a dog eat dog world. That we are all driven by our desire to survive and excel, even if such success comes at the expense of those around us. This mindset certainly has its advantages. Often, this cutthroat competitiveness allows people to succeed when they enter their respective careers. Whether corporate executives try to get a leg up on others in their boardroom meetings, scientists rush to publish findings before anyone else publishes similar ideas, or even hunter-gatherers many millennia ago hurry to find food before others could take it, it seemingly almost always helps to have a selfish mentality.

Although such a mindset may be logical, it never sat well with me. I have always felt that being selfish not only seems “wrong” but also might prevent society from running smoothly. Thus, I was pleased to read about a study claiming that children can be altruistic when they are as young as 15 months old. According to the study, some 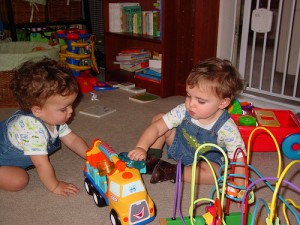 children already have developed a sense of egalitarianism by then. When researchers split up portions of food among people and divided the food unequally, many children were surprised. Their general expectation was for everyone to receive the same amount of food. Those who held this concept of egalitarianism were often willing to share their toys, even the ones they liked the most, with those who asked.

Although I highlighted advantages of acting selfishly, I think acting selflessly can be even more beneficial. By acting selflessly, children will not alienate themselves from their classmates and peers. Thus, they will not sacrifice social development for short-term gain. They will also realize that cooperation is often a more effective and efficient way of getting things done than competitiveness. According to mathematician John Nash’s Nash Equilibrium, if a player coordinates with his “opponent,” everyone can maximize his or her outcomes. This solution has many real world applications, from traffic control to a nuclear arms race.  And if all people can act selflessly, they will be more capable of coordinating with others. Perhaps most importantly, they will view everyone as an equal. With so much racial, economic, and gender prejudices in the world, an altruistic mindset can help people overcome these barriers to equality.

As I stated earlier, according to research, children are more likely to share if they have developed a sense of egalitarianism. Thus, if they are used to people being given equal shares, they are also more likely to share what they have. Children are impressionable, and if they view life as unfair from birth, they will probably act on these beliefs and be unlikely to share with and help others. Thus, I ask parents to instill this sense of equality among their children. Show them that life should be fair, and that people should be treated equally. If they do these things, perhaps they can help raise a generation of children just as concerned with making this world a better place than with surviving and excelling.