In previous posts, I’ve stated that I consider myself a human rights advocate. I define this term as an individual who works to ensure that all human beings have their basic needs met and rights enforced. This includes needs such as food, housing, clothing and rights to education and physical and religious freedom. Under international law and religious doctrine, all human beings are entitled to certain basic rights. I’ve based my entire academic and professional career on this belief.

Last week, a professor shook the foundation of this conviction when he asked: “are the rights to housing, under international law, being met when someone lives in a shack and the other person lives in a mansion?” If we talk about basic needs, then the answer is yes. Both individuals have a roof under their head. What my professor meant; however, is how is that universal and equal?

Amnesty International provides a very simple definition of human rights. It defines it as “basic rights and freedoms that all people are entitled to regardless of nationality, 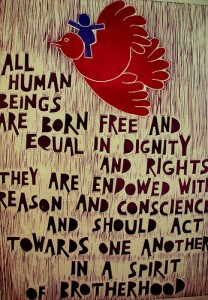 sex, age, national or ethnic origin, race, religion, language, or other status.” Human rights are supposed to be equal and given to everyone due to the simple fact that they are a human being. However, based on the example above, are they really equal when both individuals don’t share the same quality of life?

Human rights, as we know them today, were formally defined after the Second World War. The United Nations created the Universal Declaration of Human Rights, which is central to all our modern human rights law. The document outlines basic principles like freedom and equality for all, as well as the rights that belong to individuals. Looking back into history, we even see that the Declaration of Independence of the United States, stated that “that all men are created equal, that they are endowed by their Creator with certain unalienable Rights, that among these are life, liberty and the pursuit of happiness.” The foundation of this country was created with the belief that everyone was entitled to the same privileges.

The word equality is central to many policies, statutes, and law around this issue. But the truth is, has the meaning of equality changed in the last few decades? Should equality be based on quantity and not quality? To elaborate, should equality be defined as having the same number of rights, such as having access to education, housing and food, rather than the quality of the item received?

The idea of human rights has evolved throughout the years. The definition has been revised to include the rights to access to water, and there has been an emphasis on reproductive rights, the right to political freedom, and to work. In that regards, laws have adapted to the times, and questions continue to arise. For example, do we need to provide everyone with electricity and the accessibility to the use of technology? What about broader areas? Movements that focus on child rights and women’s rights are advocating for the inclusion of these rights in today’s international public policy. Fetal rights and the rights to express sexual orientation and gender identity are also up for discussion. Lastly, with climate change a major focal point of policymakers, environmental issues have been added to international agendas.

So while the list of rights that are universal to all human beings seems to be growing, the question of equality remains. While several laws include the term “basic rights”, it makes me wonder did they mean basic, as in the most necessary, or basic as in the quality of what was given to those who did not already have it?