Last Wednesday, October 5th, was World Teachers Day, initially recognized by UNESCO. While I will assume that many people did not do too much to celebrate, coincidentally I happened to attend a conference on international education.  Foundation for Social Change hosted the Global Conference for Social Change here in New York City, and Wednesday’s theme was women and girl’s education. As any responsible attendee should do, I was simultaneously listening, taking notes, following twitter, and googleing guest speakers. It was as I was juggling my attention that I realized I was witnessing first hand the entrepreneurs who are the driving force behind the movement to expanding women’s education opportunities internationally.

While the theme of the day predominantly focused around South America, I soon realized how little I actually new abut what is being done through both large and small-scale projects.  I listened to speakers on a variety of topics from Patricia Velasquez talk about the Wayuu Taya Foundation that works with indigenous communities in Venezuela, to Liesel Pritzker who works with the IDP Foundation to provide micro-loans to empower low cost private schools abroad. Equally as impressive were the organizations with a domestic focus such as Girl Up, a UN foundation teaching American girls about how other children around the world are living. With a goal of instilling awareness and compassion, the organization attempts to channel the student’s energy into understanding the circumstances of others at an early age. Despite initially being incredibly humbled by a room full of great minds, in conferences like these you can’t help but become motivated to become an advocate for change as well.

The theme for this year’s World Teachers Day was gender equality, and this fell perfectly inline with the message of the conference: empower women, empower the world. This conference brought together socially responsible and entrepreneurial 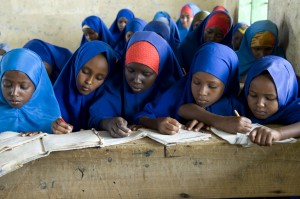 organizations working towards empowering women and children. Despite the popularity of books such as Mortenson’s Three Cups of Tea, and Kristof and Wudunn’s Half the Sky, I still cannot imagine that a majority of Americans are all that concerned or aware of the global inadequacy facing many of the world’s women. This sad truth is only further verified as our government treats education as an unnecessary commodity even domestically, repeatedly cutting funding for schools.

The one thing education has going for it in the western world is that there is little disagreement about the need to send women to school. While we see this as acceptable, this topic becomes contentions or downright outrageous in other countries. I think that Americans need to be shown that these are the basic hurdles needing to be overcome in so many other countries.

In 2010, UNESCO compiled the Global Education Digest, and in it claims:

The Digest finds that 60% of countries have not reached gender parity in primary and secondary education – a goal that had been set for 2005 at both the World Education Forum and the Millennium Summit at the turn of the century. The share of illiterate women has not changed over the past twenty years: women still represented two-thirds of the world’s 759 million illiterates in 2008.

Without bogging you down with all the statistics about the gender education gap, or facts about how an educated mother is more likely to have healthier children, the bottom line is that the world must focus now to begin making a dent for the future. Without question, families, cities, countries, and the world will all start moving in a positive direction when we promote educating the “forgotten half”.

The theme of this week’s conference has been promoting social responsibility in all facets of business. While there are many great organizations making strides in this direction we all have to do our part to promote morally responsible companies. More and more companies are realizing that the need to donate towards education improves livelihoods as well as their bottom line. In addition, I think we must all become a little more proactive in educating ourselves as to the realities of what is happening and what still needs to be done with international issues.

Happy World Teachers day. Lets hope that by this time next year we will be celebrating greater strides in awareness and education for women throughout the world.