Every year, Mattel sells millions of Barbie dolls to young girls and avid doll collectors across the world.  Barbie’s image has changed from year to year, and she has managed to be everything from a veterinarian, supermodel, to the most perfect, stiletto-wearing teacher.  None of these images and professions has drawn a great degree of anger from parents, but that has come to an end with the new Tokidoki Barbie.  Parents believe that the pink haired and tattoo sporting Barbie is a bad influence on young children, and will cause them to follow the bad example the doll sets.  However, looking at the Barbie doll, who is dressed rather modestly in a long shirt and leggings, what is the big issue?

Apparently, parents are in an uproar because they believe young girls will be negatively influenced by the fashion sense and tattoos of the new Tokidoki Barbie doll.  The doll, 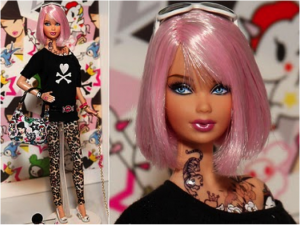 which is the brain child of Italian artist Simone Legno, depicts his love for Japanese fashion.  It is quite literally a plastic tribute to Legno’s admiration of the Japanese lifestyle, and is in fact not meant for young children at all.  The Tokidoki doll is an adult only collector’s item that is neither mass-produced nor sold in stores like Target and Walmart.  Legno’s unique Barbie is just another collaboration effort, one that the company has done with other major names such as Hello Kitty, Skull Candy, and LeSportsac.  Thus, the brand’s unique imagery has been in the public eye numerous times, and children of all ages have been exposed to it at some point or another.

However, the doll has managed to cause parental anxieties to rise in the span of a few short weeks due to the fact that Barbie is now sporting tattoos.  Though the doll is not meant for Mattel’s younger audience, parents are still convinced that their young daughters will be clamoring for tattoos though they are too young to get them.  The response over the tokidoki doll is truly astounding because it seems like a very strange paradox.  Young children are already exposed to tattoos since temporary ones have been on the market for years.  Furthermore, one in four Americans between the ages of 18 and 50 already have tattoos, which means young girls are seeing tattoos left and right on a daily basis.  In today’s society, tattoos have become quite common, and it seems strange that parents would be outraged over a limited edition, geared towards adults, collectible doll.

So what are the reasons behind why parents are upset over the tokidoki Barbie doll?  Perhaps, the issue is not so much the tattoos, but the fact that children’s toys have become more and more adult-like.  The clothing, poses, and mannerisms of many toys for both boys and girls are extremely mature, and in many cases sexual.  Society seems to be moving towards an era in which children are treated like miniature adults that are exposed to adult themes from an early age.  The lines between children and adulthood are slowly being blurred, and this phenomenon is probably frightening many parents.  Even though the tokidoki doll is meant for adults, the fact is that the doll is equated with young girls playing house and dress-up.  It seems silly to be so upset over a tattooed doll that is only sold on the internet, but there may be a deeper reasoning behind why parents are so upset by Barbie’s new look.  Nevertheless, parents might find it more important to focus on overly mature toys that are actually geared towards young children, and sold at their local Toys R’Us.