In a previous post, I wrote about the indigenous populations in Uganda. Once again, Ugandans are in the news thanks in large part this time to Rush Limbaugh. On October 14th, Mr. Limbaugh became aware that President Obama was sending peacekeeping troops to Uganda in an effort to curb the brutality of the Lords Resistance Army (LRA). Transcripts of his radio show have been published where he has since been criticized for being considerably misguided in his understanding of the LRA and political situation surrounding President Obama’s decision.

After first making me laugh at his fact checkers (and ensuing parodies), Limbaugh’s speech made me nervous because I am not sure if Americans are truly aware of the violence the LRA is imposing. Is the American population as blinded by the name “Lords Resistance Army” as Limbaugh was? Is there a chance that pundits and presidential nominees will potentially capitalize upon this assumption for use against Obama? And why would Obama chose a reelection time to send more peacekeeping troops to another part of the world, when US influence is already spread so thin?

I hope to get to the bottom of these questions in a two part blog series, outlining what the LRA is exactly, and then discussing why Obama made the decisions he has. Only in understanding the impact that the LRA has had over a number of Sub-Saharan countries over the past 20 years can Americans reach a decision as to if they support this cause.

Joseph Kony is the leader of the LRA, beginning the organization in 1986. He is currently on the “Specially Designated Global Terrorists” list for the US and believes himself to be a medium of the Holy Spirit. The LRA is currently instilling terror in Uganda, eastern Congo, and South Sudan. With most operations based in northern Uganda, the LRA is still terrorizing communities across three frontiers and no nation can seem to expel them.

The LRA are most famous for their recruitment and brutality towards children. After 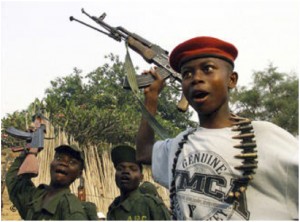 bandit groups of the LRA decimate villages, they kidnap the boys and force them to become soldiers while forcing the girls to become bush wives. Because of this, Invisible Children has taken notice and are actively trying to bring awareness to this problem. I found the video they made about the history and motives of the LRA. I found it educational as well as moving (warning, a few graphic images):

Who is the LRA from INVISIBLE CHILDREN on Vimeo.

As this clip explains, the “Lord” behind the LRA is actually Kony himself. While Limbaugh was correct in the fact that at one point in the early history of the LRA there was a political mission to unite the people of Uganda under political and religious veils, the group has since abandoned that goal. Now, they wield both weapons and fear, working for the personal enrichment of Kony directly.

In the war that has raged for over 20 years, deaths have been estimated in the tens of thousands of people. Maraudering groups kill and capture as they see fit, and often these bands are brainwashed (or drug addicted) child soldiers. Tom Malinowski, the Washington director of Human Rights Watch sadly stated, “they are incredibly vicious and have committed numerous massacres. It’s a group that seems to exist for no other purpose than to kill.”

After reading the facts about what is happening on behalf of the LRA, do you think Obama was right in sending troops? On one hand, we can not allow these rebels to keep promoting such violence across so many borders. However, we must also ask, why now? The situation has been fairly ignored for the last decade, so why would we send troops now when we are already involved in so many other nations. I hope to further understand the political implications next week.