Judging Development: Supercomputers And Your Emotions

So day two of the Social Good Summit, was another jam packed day of speakers and social media.

Empowerment of women is more important than ever

Geena Davis, actor and advocate, shared a startling statistic that the United States is responsible for 80% of all media, so we are in fact exporting many of the negative stereotypes and images about women and girls around the world.

Senator Tim Wirth, President of the UN Foundation, shared that the United Nations General Assembly is also focused on the empowerment of women making our conversations at the summit extremely timely.

An exciting public media initiative on women’s issues was announced with many of the activities starting October 11, 2011. Abigail Disney’s mini-series, Women, War and 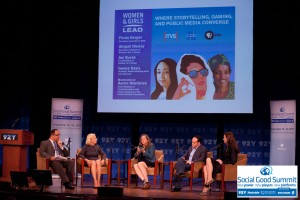 Peace will air on PBS and look at the burden and issues around conflict and peace that impact women. One statistic shared in the preview of the film was that “in many wars it is more dangerous to be a woman than it is to be a soldier.” This is true in many places around the globe and this chilling documentary provides these stories and shows the ways that women are addressing conflict. Another great project coming from this panel focused on ideas children have on gender roles and gender stereotyping. The Geena Davis Institute on Gender in Media is also releasing a series of films tailored around the perceptions children have around occupations and gender. Children are given identifiers for an occupation and then asked to describe what that person looks like. This strategy has been successful in raising awareness about racial stereotyping and helps to create a conversation about gender and gender roles in our society. Lastly, Games for Change is bringing female centered digital game content to social media platforms such as Facebook and mobile phones. These games will raise awareness of issues about maternal health and medicine and allow adults and children to connect to gender based issues. To learn more please visit the Women and Girls Lead website.

Ericsson’s CEO Hans Vestberg sat on two panels focused on cross sector collaboration between the private sector and the social sector. Ericsson is leading the way in connecting their mobile technology to address issues such as refugees and education 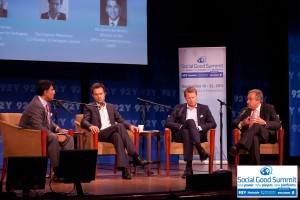 and providing their technology to empower and connect communities. He pushed for technology and those in the business sector to be engaged in these issues not only in emergency and response situations, but that there is a place for business and technology to be used in preparation and prevention as well. As a CEO of a major company, such as Ericsson, his awareness and connection to social issues was refreshing and engaging and hopefully leads to additional increased social change efforts by the business sector. As the sponsor of this event, they are hearing from a variety of social change actors about global issues and his interest in being a strategic partner will hopefully move the needle on some of these problems around the globe.

There are no quick fixes. It is about long term commitment – Antonio Guterres, UN High Commissioner for Refugees

I think as changemakers and people working for social change, we often look for the simple and quick solution without taking in the whole picture or issue. It is important to see the ways that organizations, agencies, and partners can work together to look at the long term solution rather than the short term strategy. For instance, though the malaria nets provided by Nothing But Nets are a strong strategy to address the immediate issue of malaria throughout the developing world, it needs to be combined and partnered with other strong organizations and interventions to make lasting change. As the nets only last 3 years, if there is no sustainability plan these nets will need to be redistributed again every three years. That is not effective social change. But in partnership and with a long term plan, Nothing But Nets can meet their goal of eradicating malaria. This is true for most of us working on social issues. If we work together we will see greater lasting change.

Thanks to all that are joining in my conversation on twitter and continue to stay connected throughout the week by following @NotEnoughGood.