On a daily basis, the news will report on cases of labor exploitation in restaurants, sweatshops or agricultural fields in urban and rural America.  In more severe cases, we hear of people being enslaved and forced to work against their will as victims of human trafficking. People migrate to escape hardship back home.   Poverty and political instability are two of the main causes.  There are also millions of people who are forced to flee due to violence or persecution rather than economics.  These people risk everything and leave their home with the hope and dream of achieving a better life abroad and in this case in the United States.  What happens; however, when this new journey leads to a worse situation for them and their families?

One of the first human trafficking cases discovered in Florida involved the Cadena-Sosa family.  This family network was led by the family matriarch, her sons served as 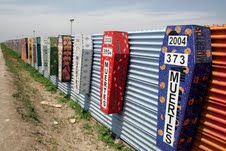 enforcers and the daughters and daughters-in-law were the recruiters.  They preyed on women from their hometown in Veracruz, Mexico with stories of jobs as nannies and waitresses in the United States.  They would give them as little as five dollars as a sign of good faith and proof of the money found across the border; instead, they took them throughout the United States and forced them to work in brothels scattered around migrant camps. All of the women were forced into prostitution and many were not able to escape their enslavement for years.

With human trafficking, movement across borders is not always necessary. Many cases of trafficking of foreigners happen when they enter American soil. Coming to this land seeking better opportunities, they fall into the hand of perpetrators who wish to exploit them and make money out of their misfortune. So does this mean we can’t migrate without misfortune being a part of it? The answer is that with globalization, movement within and across borders is more and more common. We can’t avoid moving looking for better opportunities for us and our loved ones.

A common thread I’ve seen in the types of cases where exploitation is rampant, is that usually that abuse happens because someone exploits an existing vulnerability. Sometimes, it is the lack of knowledge of the new host country, the language or the culture.  Most times, we find that people from the same ethnicity, same religion, and same hometown are those who exploit their fellow man. A prime example is a teacher in Miami-Dade County in Florida who trafficked a young girl from Haiti to serve as a domestic servant in her home.  The teacher herself was a Haitian citizen living in the United States and maintained ties between both countries. As we saw in the Cadena-Sosa case mentioned above, this organized, family network targeted women from their own community.

Do you have any other examples?

The U.S government has mandated in its Trafficking Victims Protection Act of 2000 (TVPA) that funding be allocated to assist in prevention strategies abroad.  The thought is that if people are provided appropriate information before making the journey to other countries, they might be able to escape the tricks and coercion at the hands of traffickers.

However, with an increase in the number of cases we hear about, it raises some questions for me.  Are we seeing more cases because there is more media attention on the cause or because there are truly more cases? If there are more cases, does that mean that we as a country are failing in how we are utilizing our funding? Are our efforts not reaching the most vulnerable? Every June, the United States Department of State, releases its Trafficking in Persons Report.  I guess I’ll have to see if some of my questions are answered then.