Once again day three of the summit brought amazing stories, ideas and statistics from around the globe. The crowd size is smaller, but the speakers are no less interesting or engaging.

Big Ideas, Big Challenges and a Need for Collaboration and New Strategies

The issues of child and maternal health were once again one of the main focuses of the day. This time instead of NGO and UN heads from the U.S. talking about issues within African Nations, individuals from Tanzania, Kenya and South Africa were able to provide their perspective.

President Kikwete of Tanzania received the Social Good Award and shared how mobile technology has been used to increase access and ambulatory care in his country. Though 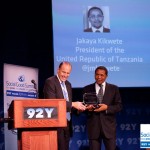 statistics are still troubling, 50 million woman die around the globe in childbirth and in Tanzania it is around 6,000 annually, their goal is to reduce that by 75% by 2015 by increasing access to care and birth attendants.

The first ladies of Kenya Dr. Ida Odinga and South Africa, Thobeka Mabhija Zuma, shared their first tweets (with Ericsson phones of course) and discussed the importance of social media and 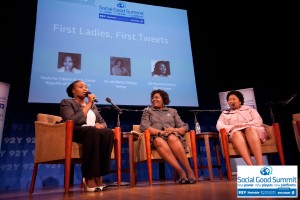 technology in social change. Both discussed the benefits to nonprofits and other smaller organizations with limited budgets. Dr. Odinga of Kenya emphasized the importance of mobile technology in Kenya and how they are using it to connect patients with doctors using SMS technology. She also emphasized the connections to rural communities that is only truly possible with  mobile penetration.

Dr. Yunus founder of Grameen Bank, shared a trailer from his film To Catch a Dollar and shared how our employment problems can be solved with a shift in focus on the development of businesses. He stated that if we were to create businesses, not by focusing on the profit that could be made but on the jobs that would be created, many more businesses and job opportunities could be developed. Using a nonprofit/social enterprise focus with what is typically for-profit business models could increase opportunities for impoverished communities here in the states and around the globe. His methodology states that as long as your costs are covered and it creates employment and other opportunities, profit should not be a focus or motivator. This is an interesting strategy and one that politicians and others have not necessarily pushed. In our society, if a business is not focused purely on social outcomes, such as a nonprofit organization, than we are usually unable to envision it without a profit model.

Several professors from NYU and the founder of Just Vision Media, discussed Israel-Palestine relations, Arab Spring and the connection to technology. Professor Tawil-Souri emphasized that though technology played a role, it was traditional forms of media (radio and print) and open spaces that truly made these revolutions possible. Without the freedom of assembly, demonstrations in squares bringing the people together that share a common belief, would not be possible.

There were so many other great ideas and campaigns including the Million Moms Challenge to get mothers and mom bloggers involved in global maternal health issues, the Shot at Life campaign to reduce the number of children dying of vaccine preventable diseases, and the One Day on Earth documentary and campaign which captured images from every place on earth on 10-10-10 and created a video archive that people can download and use. Another startling statistic was shared by Ju Ju Chang of ABC News that the number of children that die from malnutrition is equal to 8 buses full of children crashing and killing everyone, each hour, every day. If you think about our reaction to one bus crash and that malnutrition is preventable, it is even more startling.

Skype in the Classroom

The Skype CEO shared information on their technology to connect teachers and classrooms around the globe. Teachers are sharing projects, having great guest speakers and creating new age pen pal programs, all through 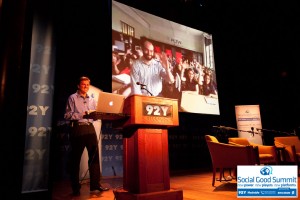 the use of Skype in the Classroom. In the first 6 months of the program over 16,000 teachers have signed up and used the technology. We connected via Skype with a class in Newark that are using the technology and talked with the students and the teacher about their use of the technology. It was a great opportunity to see the process in action. It is very exciting if it is possible to bring together more classrooms this way. Hopefully it is not limited to only the wealthy schools that can afford the required supporting technology and that all students will one day be able to fully take advantage of this type of technology.

It is so unfair for a woman to die while giving life to another human being ~ Jakaya Mrisho Kikwete, President United Republic of Tanzania

This phrase is so true and frustrating. As we heard from many of the speakers throughout the week maternal health and childbirth are serious issues around the globe. Archbishop Desmond Tutu, the chair of The Elders,  also raised his concerns about these issues in relation to child marriage. Their campaign Girls Not Brides, is hoping to decrease the number of young girls who are married before they are 18, often 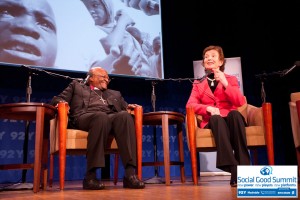 without their consent. A large number of the people dying in childbirth are girls that are married but too young for childbirth. They shared a video about their campaign and in it he stated that “once you have liberated women it is amazing what other problems will be solved…Women are key”. I couldn’t agree more.

The summit wraps up today but you can read my previous recaps from Day One and Day Two and follow me again today on Twitter @NotEnoughGood.