Those of you who have spent any time with me over the past few months have probably noted my burgeoning obsession with reruns of the tv series The West Wing. In his Emmy-winning show, which documents the administration of fictional liberal president Josiah Bartlett, Aaron Sorkin writes intelligent dialogue, develops characters the audience cares about, and introduces policy positions that Americans can spend their next few days debating with friends. One such position, proclaimed by Deputy Communications Chair Sam Seaborn, reminded me of the role and state of public education today:

Education is the silver bullet. Education is everything. We don’t need little changes. We need gigantic revolutionary changes. Schools should be palaces. Competition for the best teachers should be fierce. They should be getting six-figure salaries. Schools should be incredibly expensive for government and absolutely free of charge for its citizens, just like national defense. That is my position. I just haven’t figured out how to do it yet.

This sentiment, though probably infeasible, is certainly laudable. Education provides individuals with opportunities they never would have gotten without it. Even without the opportunities it brings, education is inherently valuable because many of us are inquisitive and want to learn for the sake of learning. It’s not good just for those who receive it. Educating one man can benefit all of society. So much innovation and economic growth result from education. It also allows for citizens to be more informed, which presumably makes our governmental leaders more accountable and improves our democracy. Having educated citizens should be a hallmark of civilized society. Just as all people should have the right to health care, civil liberties, and protection from our armed forces, we should all have the right to learn.

But in spite of its importance, education is not always treated with the importance that it warrants. Unfortunately, after a decade of irresponsible spending, our government is facing a deficit that requires budget cuts. In North Carolina, where I live, we have observed cuts to public schools in each of the past three years. North Carolina Governor’s School, a free summer program for high achieving high school students, lost all of its state funding. Even universities are facing budget cuts. For example, the University of North Carolina – Wilmington is considering cutting the Physics department.

I fear that the pendulum is swinging in the opposite direction that Seaborn had hoped. Some of our schools more closely resemble overpopulated slums than palaces. The median teacher salary is closer to zero than it is to six figures. And income disparities between the rich and poor remain as high as ever.

Why is education not taken as seriously as Sam suggested? Yes, as our governmental leaders suggest it would be expensive to put more money into our schools. But important services such as education should be of top notch quality. We make more than enough sacrifices to make sure our national defense is the best in the world. Why can’t we do the same with our schools? People need to understand the importance of education from a societal perspective. If they can push this agenda through to our political leaders, perhaps our schools will stop lagging behind.

Times are tough now, but education will ultimately save this country. This is not the 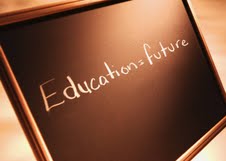 time to cut funding for it. Since the technological revolution, the world has been shrinking at an exponential rate. To keep up, if we plan to develop an efficient alternative fuel source to get rid of reliance on foreign oil and to curtail global warming,  and if we plan to communicate and do business with foreign countries, we need to continue to train engineers, innovators, businessmen, and diplomats. We need people studying engineering and science, economics and math, history and Mandarin and Hindi. What’s a better stimulus package than ensuring that our next generation of graduates are prepared to function at a high level in the real world?

The way our government’s budget looks right now, we can’t increase investment in education. We are left with two options: cutting spending on education or raising tax revenues. Budget cuts on education will only delay the bleeding. Sooner or later, having a poorly educated public will come back to haunt us. Thus, we have no option but to somehow raise tax revenues.

A few weeks ago, Warren Buffett published an op-ed in the New York Times in which he proposed raising taxes on Americans making over 1 million dollars. He even suggests that raising taxes on the rich shouldn’t significantly deter people from making good investments, which is the argument often made by supply-side economists. Over the next few months, a super committee of 6 Republican and 6 Democrat Congressmen will meet to try to reduce the deficit by $1.5 trillion. Considering our ability to educate our youth may be up for grabs, I really hope they consider Buffet’s proposal and take Sam Seaborn’s words to heart.