In my last post, I gave an overview of the plight of U.S. child farmworkers and the lack of protection they receive.  Hundreds of thousands of children are working on U.S. farms, picking the fruits and vegetables that land in our regularly shopped grocery stores.  Despite popular belief, the agricultural industry has been found to be the most dangerous of all child labor industries in the U.S.  It is an industry that is often bound in health, safety, economic, social, educational, emotional and civil rights violations.  Most U.S. child farmworkers begin working long adult hours as young as 11 or 12, with many starting part-time hours much younger than that—as young as 5 or 6.  U.S. law is not doing enough to protect children in agriculture and the nation is generally unaware of the reality of child farmworkers in their own country.

There is a clear lack of protection for young agricultural workers written into the U.S.’s Fair Labor Standards Act (FLSA) when compared to other industries employing youth.  In regards to age, young agricultural workers may begin working in any farm job without restrictions.  This includes operating heavy machinery such as tractors, working from ladders or scaffolds over 20 feet tall, handling and applying toxic chemicals “identified by the words “danger,” “poison,” or “warning” or a skull and crossbones on the label,” and handling and using explosives, among other tasks.  However, in all other legal industries hiring youth, 16 and 17 year olds are not allowed to endure hazardous work conditions and are protected under law.  16 years old is the general minimum age for children being able to work in nonagricultural jobs, whereas 14 is the standard minimum age for children to work in agriculture.  Yet, 14 is not the bare minimum age in agriculture as there are many exceptions that are often taken advantage of.  Children who are 12 and 13 may work on farms that employ their parents or if their parents give consent.  Children under 12 years old are able to work on farms with parental consent as well, as long as it is one where employees are not subject to the minimum wage requirements of FLSA.  Finally, children who are 10 and 11 may legally hand-harvest short-season crops.  Still, due to the lax labor laws regarding 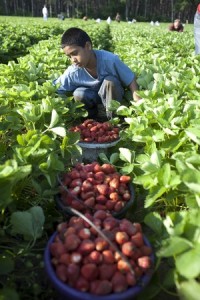 There is a proposed bill that would greatly improve the protection of children working in agriculture—the Children’s Act for Responsible Employment (CARE Act, HR 3564).  It was introduced in 2009 by Rep. Lucille Royball-Allard with the intention of revoking exemptions made in child labor law at it relates to the agricultural industry.  This bill is necessary to include in current legislation.  It will begin to help and protect children who are currently, or at-risk of, enduring the hazardous work conditions that accompany the agriculture industry.  The FLSA has outdated laws when it comes to children in agriculture.  The misperceptions of the agricultural industry being safe are fueled by current law.  People and parents think that it is ok that children are exposed to agricultural work environments because the law says so.  By changing the law, we would not only be protecting children from harm, but we would also have a tool to build a strong foundation in educating farm owners and the general public on the realities of children in farm work.

Passing the CARE Act would create increased awareness of U.S. child farmworkers and the hardships they endure.  Awareness will spark attention and mobilize action.  Local communities have just as much power in enforcing law as Congress has in passing it.  Community watch around farms can keep an eye out and report violations.  Rural school teachers can educate children and parents on the dangers and consequences of farm work to children’s development and future success.  Advocacy groups can educate their local communities on the realities of child farmworkers and the damaging conditions they experience, as well as influence and motivate others to take action.  Communities can be powerful entities in eradicating harsh child labor, but it begins with changing current law.  What are your thoughts?  Are there other ways you believe would be effective in creating awareness and protecting U.S. child farmworkers?