Now that South Sudan’s independence is a reality, a new set of challenges awaits

All of this is, of course, a reason to celebrate. But now that the cars in Juba, South Sudan’s capital, have stopped honking their horns in jubilation, many are wondering what moves South Sudan will make next. Building a country from scratch is no easy task, after all. Think of how much goes into developing a new legislative system, a new government structure, a new currency, new institutions…the list goes on and on.

One key issue is that of oil, something I’ve written about before. Traditionally, South Sudan’s oil has been pumped out through pipelines that lead to the Republic of Sudan in the north. This allows the Republic of Sudan great control over South Sudan’s main export. There are still contested oil rich regions along the border between the north and the south where each side is vying for control. Temporarily, a force of Ethiopian peacekeepers is keeping the situation from exploding into outright war, but this force cannot pacify the region forever. While there is talk of developing a pipeline through Kenya and beyond that would eliminate the need to pump oil through the north and potentially reduce these tensions, no tangible plan has yet been agreed upon that would allow this to happen. For the time being, South Sudan must rely on its northern brother for transportation of the vital resource.

“The resources with which nature has endowed our land are abundant enough to attract the interest of development partners both from the public and private sectors from many countries across the world, so we should exploit these possibilities to better the lives of our people.” –South Sudan President Salva Kiir

To put the importance of this oil in perspective, keep in mind that 98% of South Sudan’s revenues comes from oil. Salva Kiir, South Sudan’s President, and other officials 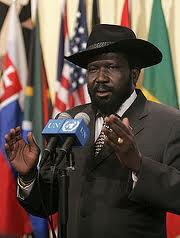 understand the need to develop other sectors in their industry beyond oil. They have their eyes on agriculture, which could be a booming industry. With only 30 miles of paved road in the entire country, however, it’s hard to get any industry up and running. These are the issues that South Sudan must now address. Much could be accomplished in the way of developing infrastructure to jumpstart agriculture with the hundreds of millions of dollars in direct aid South Sudan will be receiving – if it is used properly.

And here lies another problem. What measures are in place that will ensure the leaders of South Sudan do not simply exploit the country for all it is worth and do little to advance the wellbeing of its people? Allegedly, President Salva Kiir demanded and was granted absolute power in the South Sudan Legislative Assembly. If this news is true, the people of South Sudan may be in for a rude awakening if he turns out to be less than the democratic leader they had hoped for.

In hopes of helping steer the new country from the mire of corruption, an anti-corruption and security US firm with experience in similar situations has opened a branch in South Sudan. Knowing the potential for rampant corruption, I’m sure this firm is eager to turn a profit. Regardless, their services will most definitely be needed and appreciated.

Between the oil and the basic challenges of setting up a new nation, South Sudan is in for quite a year. Let’s hope that the new government delivers the people what they are hoping for – a free, independent and sustainable nation.