In a previous post I discussed one of the reasons why some crops (such as corn and soybean) have gained so much importance in our agriculture. Our food system and our food quality are set up in a way that inevitably increases the demand of these two crops, and economical and political systems have incentivized the cultivation of these two crops.

Another reason, which I believe allows these bad agricultural practices to persist, is the increasing demand for “bio products”, such as biodiesel and bioplastics-among many others-.

The popularity of these products has grown because they are perceived as being “green” and environmentally friendly. But if you take a deeper look into what are the impacts of these products, and what is required to produce them, it is inevitable to raise the question of how “green” the products really are. Let’s take a closer look at biodiesel.

Biodiesel is proposed as an alternative to fossil fuels. In recent years, biofuels have been praised as a solution to climate change, green house gas emissions, and foreign-energy dependance.  But the reality is that some biofuels may impact more severely the environment than what is often perceived. How is that so? First of all, we have to understand: where do biofuels come from?

Biofuel is any type of fuel that originates from biomass. Biomass is anything that comes directly from living/dying nature. Biofuel can be generated from plants (vegetable oil), excrements, algae, etc.

I will only discuss the impacts of biodiesels that originate from vegetable oils, because they are the ones that involve the agricultural industry. The vegetable oil that produces biodiesels comes mostly from palm trees, soybeans, corn and sugar cane. The 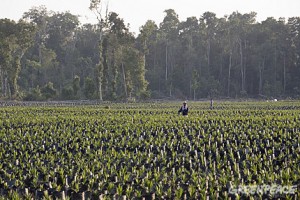 increasing demand to produce biodiesel has put a higher value (increased the price) of corn, soy, sugar cane and palm trees. The rising prices of these crops have two important consequences: they increase deforestation rates and they decrease food supply.

Rising prices in these crops has increased deforestation because the profits that governments and companies get when they grow “biofuel plants” has increased. Governments and enterprises have clear-cut rainforests and peatlands to cultivate palm trees, sugar cane and soybeans. Palm tree and sugar cane grow in tropical climates; therefore countries such as Brazil and Indonesia are the ones to have greatly reduced their forests. And as the demand rises more and more, prices go higher and higher, giving more incentives (because profits increase) to clear cut carbon rich tropical forests. Producing biofuels from crops that are grown in land that use to be rainforest is especially damaging to the environment since it emits more greenhouse gases. Biofuels that originate from vegetable oil increase climate change because all the trees that would trap green houses gases are being cut to grow crops that are used to produce biofuel. In such conditions, biofuels have the function of an environmental Trojan horse (see a report here): they are perceived as a solution to green house gas emissions, but in reality they damage the environment in a more important level.

Therefore, due to its massive destruction of rainforests, it is not surprising that Indonesia is becoming the 3rd largest greenhouse gas emitter (see here). In large scale palm oil plantations in Borneo and Sumatra, and sugar cane plantations in Brazil, waste water and pollution, over-fertilization, soil erosion and chemical spraying, are all major problems that add to the negative impacts of agro fuels. If we want to use biofuel, the only vegetable oil that would be useful is the one that is recycled directly from kitchens. The oil that we use to fry our potatoes is the one that we should recycle and produce biofuel with, but we should not be tempted to increase vegetable oil production.

On the other hand, producing biofuels is severely distortionning the food market. A World Bank study suggest tat 70 to 75% of the increase in food commodity prices from 2002 to 2008 was due to agrofuels  and related consequences such as low grain stocks, large land use shifts and speculation. That’s when the production of biofuels becomes not only a matter of protecting the environment but also of human rights and food security. Is it fair that to feed our thirst of cars and transportation comfort we should sacrifice the food security of other people?

It is true that the corn that is produced for ethanol is not eatable; so the land that is used to produce the type of corn that feeds cars could be used to grow a crop that would actually feed people. It is not just a matter of appropriately distributing the food, it is also a matter of growing the right crop.

What’s more, the protectionist agricultural policies of the United States have banned the imports of sugar cane from Brazil, even though sugar cane is much more efficient than corn to produce biofuels. Banning sugar cane from Brazil increases corn production in the U.S, therefore the ban only benefits the corn industry of the U.S (and brazilian farmers are negatively affected, because their crop is not sold).

In spite of all these disadvantages that go into producing biofuels, the demand has continued to rise. Europe has set a goal to increase it’s biofuel consumption, hopefully a goal that will be reverted; in the Unites States, the Energy Independence and Security Act of 2007 mandated a renewable fuel standard requiring that by 2015 the United States will be using 15 billion gallons of corn-based ethanol.

The demand for biofuels is damaging our environment and our food supply. To stop it, the economical incentives (agricultural subsidies promoting production of corn) and political incentives (countries’ goals to increase biofuel use) to produce it should be modified. We could reallocate our resources to produce better crops and healthier food. Food is a human need, it is not like any other commodity.  Until we regulate our agricultural markets wisely- in a way that is environmentally friendly and ensures human rights- biofuels will continue to be an important contributor to bad agricultural practices.