On Tuesday, I wrote about foreign aid into Sudan. While I did write a few lines about the security situation there, I didn’t go into much detail about it. I have a tendency to get caught up in the numbers and facts of aid. Sometimes it’s good for me to remind myself of the human element of aid – after all, that’s what it should be all about. To understand the reason why aid is even necessary in Sudan, it’s important to know what the people there are dealing with on a day-to-day basis. So what is actually happening there? And why does security even matter?

As I mentioned in the previous post, the Sudanese people are no strangers to violence. For decades, Sudan fought a civil war on and off. The war was mainly between the 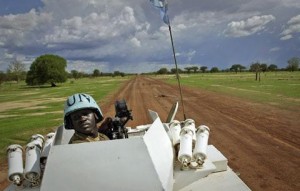 Muslim north and the Christian south. Millions have died serving their cause, yet violence persists. In spite of various peace agreements meant to bridge the gap between the north and the south, the security situation remains volatile.

The International Criminal Court (ICC) has been investigating the violence in Sudan since 2005. This came after a United Nation inquiry that revealed evidence of human rights violations. Many of these violations can be traced to Sudan’s president, Omar al-Bashir, who has been in power since 1989. Over the course of its investigation, the ICC has repeatedly issued warrants for the arrest of al-Bashir, none of which have been served. In a recent ICC testimony to the UN, al-Bashir was once again charged with crimes against humanity and genocide. So much for the success of the 2005 Comprehensive Peace Agreement.

This terrible news comes on the heel of reports of continued violence in Sudan. It seems the violence is a northern initiative to control key southern positions ahead of the southern secession, scheduled for July 9th. Most of the recent conflict surrounds the border region between southern and northern Sudan. Sudanese troops from Khartoum, the northern capital of Sudan, have been attacking the southern Abyei region. This region is known to possess vast oil reserves, making it a very desirable area to control.

When northern forces attacked, over 100,000 fled the region with nowhere to go. Human rights organizations estimate that since the start of the conflict, 2 million people have been killed, 4.5 million have been displaced within Sudan and 400,000 have fled the country. Imagine how great of an effect these kinds of attacks have on the people of the region. Where do you go when you can’t go home and everyone around you is in the same displaced situation? What limited access some of these people had to food and clean water is now disrupted. And who knows how long they’ll have to be on the move. When the UN requested that Khartoum withdraw its forces from the region, it received a flat refusal.

What general role does security play when it comes to aid? According to David Phillips, a former senior State Department advisor, foreign aid depends on three things: security, relief and recovery. The order of these three items matters. Without security, nations may be hesitant to provide the relief resources that could lead to recovery. Sudan’s unstable atmosphere scares aid organizations away. After all, who wants to invest in a country if it is on the brink of being ripped apart by another civil war?

Boosting the economic status of suffering people and providing necessities like healthcare, food and water are all ways in which aid organizations can help the Sudanese people. But if we lose site of the human toll the people are paying daily while we are assisting them, we are failing to address the biggest issue. Security is indeed paramount to relief and recovery.

It’s time for the UN to listen to the ICC and do something about al-Bashir. The UN peacekeeper forces in Darfur cost a staggering $2.6 a year, yet hardly accomplish their goal of keeping the peace. So if ending violence in current Sudan is unrealistic, the UN should do everything in its power to support the south as it splits off from the north. From his Khartoum headquarters, al-Bashir is demonstrating his power by attacking southern regions. If the international community doesn’t actively respond to this, why would he stop the attacks after Sudan is divided? Come this July, the southern Sudanese are going to need our support more than ever.